Sánchez: "While the PP blocks our energy policy, in Europe they follow the path set by Spain"

He challenges Feijóo to portray himself with taxes on banking and energy: "Are you going to defend the majority or a minority, however powerful it may be?". 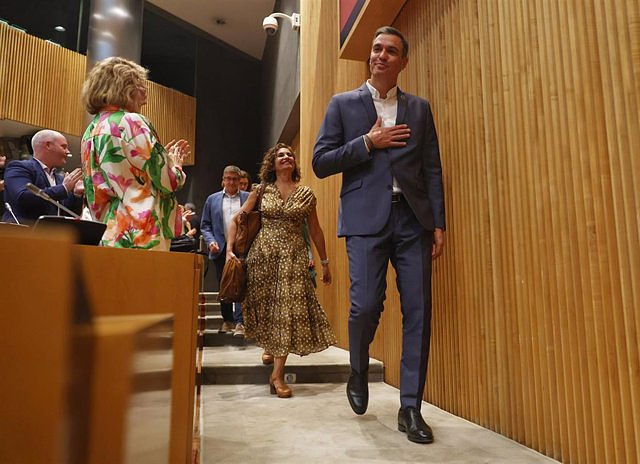 He challenges Feijóo to portray himself with taxes on banking and energy: "Are you going to defend the majority or a minority, however powerful it may be?"

The President of the Government, Pedro Sánchez, highlighted this Monday that, while the PP "blocks" the Government's energy policy, "in Europe they are following the path that it marks in Spain" and that in the European debate on this crisis, ours "Today it is the country with the greatest credibility in terms of energy policy."

This was stated before the socialist deputies, senators and MEPs gathered in Congress, underlining that Spain was the first country to demand before the community institutions "a deep and structural reform" of the electricity market, a year ago, when "there was few who believed it possible to open this debate".

"Today all of Europe recognizes the need to intervene in a market that is broken," he stressed, noting how "there are even a good number of countries that want to apply the cap on gas."

Sánchez has indicated to his fellow parliamentarians that the conclusions of the Member States at the last meeting of energy ministers contain "what the Government of Spain has been proposing for a year", with extraordinary taxes on energy companies, a reduction in their income, the review of the CO2 emission rights market, maximum gas prices or market reform.

Faced with this, Sánchez has criticized the opposition of the PP to these measures when they have been debated at European level and in Congress, as well as those contained in the energy saving plan, supported mainly by the citizens, "be they of the ideology that be."

"All the common sense that people exhibit is what is lacking in the opposition," Sánchez asserted, before assuring that these sacrificial measures do not alter or worsen the quality of life, and at the same time are necessary to gain "energy sovereignty "in front of Russia.

In this sense, he has assured that he sees citizens "more committed than some economic, political and media elites that seek to fray and divide society into elements in which there is citizen consensus."

Sánchez has pointed out how, after "more than a year battling" to achieve market intervention, "always with the PP against", he now hopes that these measures "will cushion" the rise in prices, but pointing out that in the face of this he must face "how the burdens are distributed" of the crisis, something that for him is "the mother of the lamb".

In this sense, he has defended protection measures such as increases in pensions, the minimum wage or scholarships, or the discount on public transport -reaching free trains on the Cercanías-, but also the new taxes on large energy companies and entities which is undergoing its first examination in Congress this Tuesday.

Precisely, the President of the Government has said that this vote will portray "who defends each one and what interests each defends": The question is very clear: Are they going to vote against common sense? Are they going to defend the interests of the majority or those of a minority, however powerful it may be?" Sánchez asked.

‹ ›
Keywords:
Pedro SánchezElectricidadPPCongreso De Los DiputadosUE
Your comment has been forwarded to the administrator for approval.×
Warning! Will constitute a criminal offense, illegal, threatening, offensive, insulting and swearing, derogatory, defamatory, vulgar, pornographic, indecent, personality rights, damaging or similar nature in the nature of all kinds of financial content, legal, criminal and administrative responsibility for the content of the sender member / members are belong.
Related News