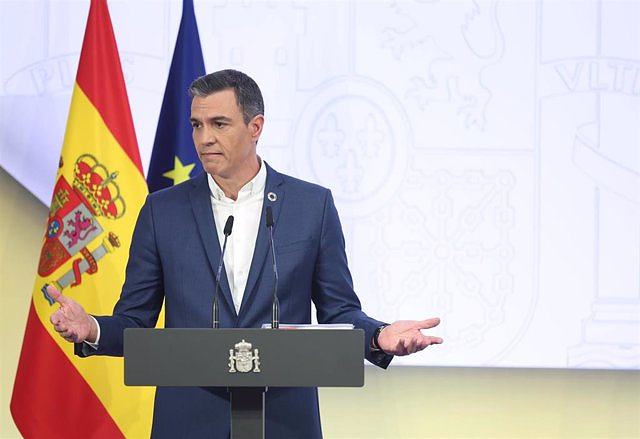 The President of the Government, Pedro Sánchez, has valued the "structural change" in employment and has considered that "the data must be read with different lenses" after the labor reform, although he has assured that the Government "will not even fall into euphoria nor in catastrophism" on the figures known this Tuesday.

This is how Sánchez pronounced himself from the Palacio de La Almudaina, in Palma, in an intervention before the media after his summer office with King Felipe VI, on the employment data for the month of July that reflect a loss of 7,366 affiliates and an increase of 3,230 unemployed.

"The Government is not going to fall into euphoria or catastrophism," assured the president, after claiming "common sense" and highlighting the fact that there are half a million more affiliates than before the entry into force of the labor reform .

On this, the president has highlighted that historically the month of July suffered a drop in the hiring of permanent jobs by about 100,000, while the temporary one increased.

However, in July of this year there was an increase in permanent contracts "thanks to the labor reform" of 145,000 jobs and it is now at "historic highs". In addition, Sánchez has indicated that a reduction of 76,000 temporary jobs has been verified, a dynamic that is repeated "month after month" after the labor reform came into force.

"It represents a clear commitment to labor stability and certainty from the labor and business point of view," stressed the president, after emphasizing the "structural change" that the reform agreed between social agents and the Government has brought about.

In addition, he has defended the measures promoted to cushion the economic and social effects of the war in Ukraine, such as selective tax cuts for the working class, support for the most vulnerable and the distribution of war burdens through the two new taxes on banks and energy companies.

"That those who have the most, put their shoulders to the wheel and that it is not the usual ones who pay the consequences of the war," the president defended about the promotion of these two tributes.

In conclusion, the Chief Executive stressed that the Government will always be aware of the evolution of the economy and has stressed that it is going to do "everything and more" to protect the middle and working class and the recovery that Spain had been registering until outbreak of war.

‹ ›
Keywords:
Pedro SánchezParo
Your comment has been forwarded to the administrator for approval.×
Warning! Will constitute a criminal offense, illegal, threatening, offensive, insulting and swearing, derogatory, defamatory, vulgar, pornographic, indecent, personality rights, damaging or similar nature in the nature of all kinds of financial content, legal, criminal and administrative responsibility for the content of the sender member / members are belong.
Related News