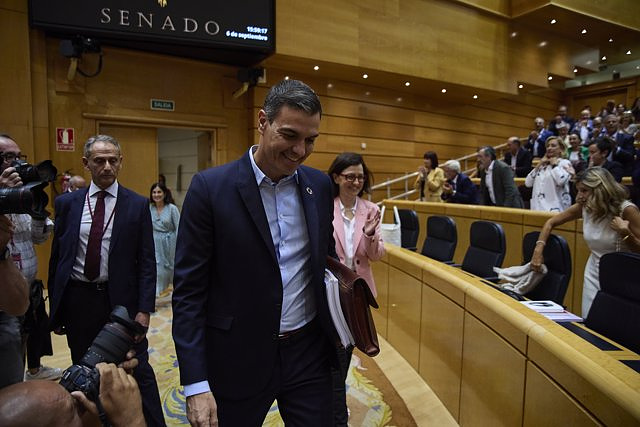 The President of the Government, Pedro Sánchez, began his appearance in the Senate on Tuesday, acknowledging the "uncertainties" that weigh on Spaniards after the holidays, with the energy crisis and "prices through the roof".

After a minute of silence for the latest victims of sexist violence and the inauguration of the senators appointed by the renewed Andalusian Parliament, Sánchez has taken the rostrum promising that he will speak about these problems "frankly" and without euphemisms.

The head of the Executive asked to appear in the Upper House to talk about energy and its economic consequences after this debate was claimed by the leader of the PP, Alberto Núñez Feijóo, with a seat in the Senate but not in Congress. Those who, on the other hand, will not be able to participate because they do not have a seat there are the leaders of Vox, Ciudadanos and United We Can.

The parties led by Santiago Abascal and Inés Arrimadas do not have their own group, so they must share their times with other parties. United We Can has it worse, which will not intervene since it does not have senators.

The request to appear transferred by the Executive to the Senate points to Sánchez's willingness to "report on the Energy Savings and Management Plan and its territorial perspective, as well as its economic and social context."

Therefore, the debate is not limited to the decree law on energy saving measures that was already voted in Congress, but rather includes the design of that broader Contingency Plan that the Government must send to Brussels, as well as an analysis of the context economic of the country.

In his initial speech, Sánchez is supported in this appearance by his three vice presidents Nadia Calviño (Economy), Yolanda Díaz (Work) and Teresa Ribera (Ecological Transition), and a good part of the ministers of the PSE and United We Can.

According to the organization of the debate, Sánchez will not have a time limit, while each parliamentary group will have 15 minutes for their first intervention and 5 for the second, with the exception of the Mixed, which has 18 and 6, respectively. The same scheme is followed that was used in the previous appearance of the Chief Executive, held in September 2020 and which lasted for almost six hours.

‹ ›
Keywords:
SenadoPedro Sánchez
Your comment has been forwarded to the administrator for approval.×
Warning! Will constitute a criminal offense, illegal, threatening, offensive, insulting and swearing, derogatory, defamatory, vulgar, pornographic, indecent, personality rights, damaging or similar nature in the nature of all kinds of financial content, legal, criminal and administrative responsibility for the content of the sender member / members are belong.
Related News