Sánchez receives the new State Attorney General in Moncloa, who gives him the 2021 Prosecutor's Report 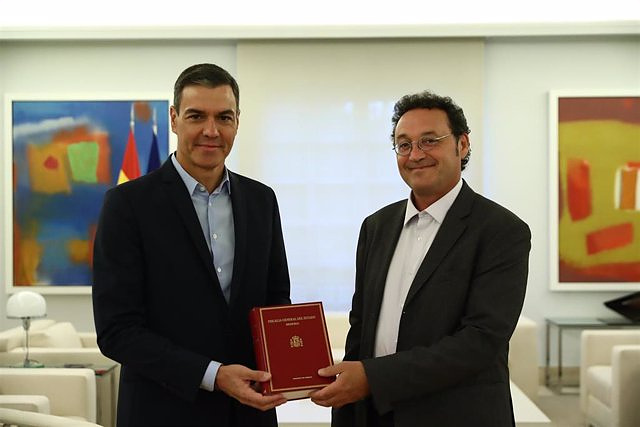 The President of the Government, Pedro Sánchez, received this Tuesday in La Moncloa the new State Attorney General, Álvaro García Ortiz, who gave him a copy of the Annual Report of the Public Prosecutor's Office, which includes the activity of the Public Prosecutor's Office corresponding to the last judicial year, as well as the evolution of crime and crime prevention.

The Report will be made public tomorrow, Wednesday, September 7, at the opening ceremony of the Judicial Year 2022-2023, which will be held in the Plenary Hall of the Supreme Court.

This Monday, García Ortiz premiered his position with a visit to King Felipe VI at the Palacio de la Zarzuela, in which he also presented him with the Memory of the institution.

García Ortiz met with the King after taking office on Monday as the new State Attorney General to replace Dolores Delgado, who resigned last July citing health reasons, in a formal act in the Supreme Court (TS).

The until now head of the Technical Secretariat of the General Prosecutor's Office already promised the position before the King on August 2 in a ceremony held at the Almudaina Palace in Palma, in Mallorca.