This city is the capital of the region assigned to the Army in the Balkans conflict. 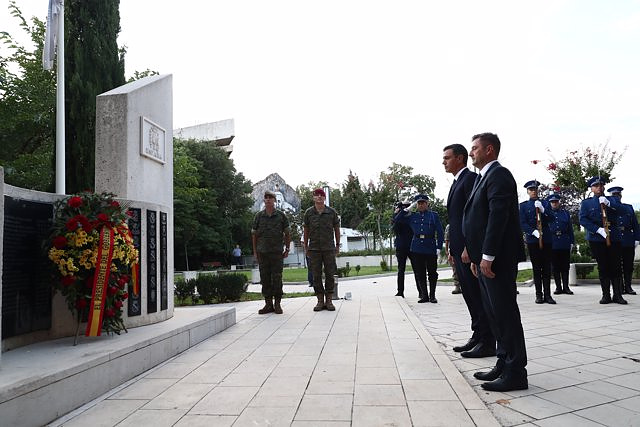 The President of the Government, Pedro Sánchez, paid tribute this Saturday to the 23 Spanish soldiers who died during the Bosnian war, with a floral offering in the town of Mostar, during the tour he is carrying out in the Western Balkans.

Sánchez paid tribute to the monument that commemorates the fallen soldiers, located in the Plaza de España in this town in Bosnia, capital of the region under Spanish command during the Balkan War (1991-2001). Next to him were the mayor of Mostar, Mario Kordic, and the deputy foreign minister, Josip Brkic.

The crown of flowers in the name of the 'President of the Government of Spain', as it appeared on the tape, has been placed by a commander and a lieutenant colonel of the Army, the last two Spaniards who continue in the country on a military mission.

Sánchez has included the visit to Mostar as part of a tour of the Western Balkans that began this Friday and has so far taken him to Belgrade and Sarajevo and will continue in Montenegro, North Macedonia and Albania. Throughout the trip, the head of the Executive has conveyed Spain's support for the processes of accession to the European Union.

The head of the Executive has a personal link with this country because he was assigned as chief of staff of the then UN High Representative in Bosnia, the former Spanish minister, Carlos Westendorp.

The last two soldiers to die in this country were Sergeant Joaquín López Moreno and Lieutenant Santiago Hormigos Ledesma, who lost their lives in a helicopter accident together with the two German officers who accompanied them on the aircraft.

The Bolkow 105 helicopter crash occurred on June 19, 2008 after the aircraft crashed into a wooded area in the town of Banja Luka minutes after taking off from the European Union Force Headquarters in Bosnia (EUFOR Bosnia) , located at the Camp Butmir base.

The first Spanish contingent arrived in the area in October 1992 and in total, more than 46,000 soldiers belonging to the Army, the Air Force and the Marine Corps, who have maintained detachments in their area of ​​responsibility, have served.

At the end of that year, the confrontation between the Serbs and the coalition of Croats and Muslims fighting for control of Bosnia-Herzegovina became fierce, and in early 1993 the Croats and Muslims, hitherto allies, began to fight each other. In April, the war spread to the sector assigned to the Spanish forces in the Neretva valley, mainly Mostar, where the most violent fighting took place.

Among the missions entrusted to them, they have worked to avoid clashes between the three entities present in the area and, once the armed conflict ended, they have stabilized it and contributed to social peace.

‹ ›
Keywords:
Pedro SánchezBosniaFuerzas Armadas
Your comment has been forwarded to the administrator for approval.×
Warning! Will constitute a criminal offense, illegal, threatening, offensive, insulting and swearing, derogatory, defamatory, vulgar, pornographic, indecent, personality rights, damaging or similar nature in the nature of all kinds of financial content, legal, criminal and administrative responsibility for the content of the sender member / members are belong.
Related News