Sánchez, on sending 'Leopard' to Ukraine: "We are going to maintain unity and coordinate with the rest of the allies"

The PP urges the Government to provide tanks to Zelensky while United We Can criticize the shipment of weapons. 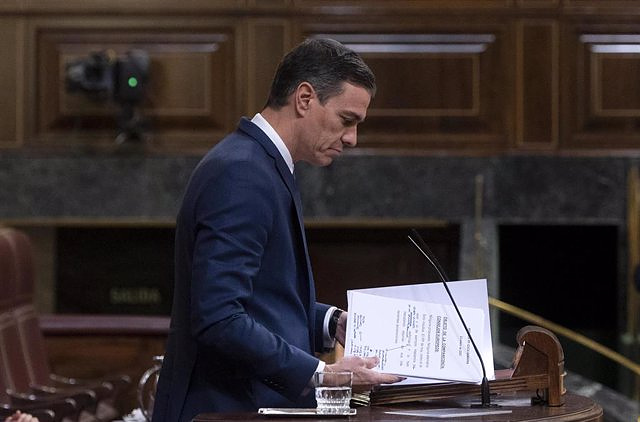 The President of the Government, Pedro Sánchez, has assured this Tuesday that Spain will act with "unity" and in "coordination" with the rest of the allied countries to send 'Leopard' battle tanks to Ukraine, although without specifying what the decision will be of its Executive.

"We have always defended that all countries have to go hand in hand on this issue, we are going to see exactly what this decision is based on," he said after learning of Germany's decision to send 'Leopard' to Ukraine and allow other countries that can do it.

In this sense, he has not specified what the Spanish Government will do but has insisted on "unity". "We are going to maintain unity and logically coordinate with the rest of the allies and especially Europe", he assured.

In any case, he recalled the military material already provided by Spain, which he summarized as 400 tons of ammunition, light weapons, anti-tank systems, the Aspide anti-missile battery or the Hawk anti-aircraft system, which he has assured are "highly valued" by Ukraine. and this is how its president, Volodimir Zelensky, has transferred it to him.

He has also reviewed the humanitarian aid from Spain, the training of Ukrainian soldiers in Spain or the shipment of 20 tons of health protection equipment, 77,000 winter uniforms, high-voltage equipment and generator sets.

Within this framework, Sánchez has opted for the need to end the conflict and has supported the ten points for peace proposed by Zelensky. "We have to show that unity with Ukraine and give rise to these conversations," he has advocated, betting on the role of France and Germany as intermediaries.

In this debate, the general secretary of the PP has blamed Pedro Sánchez for being "more concerned with appeasing Putin than with arming the Ukrainians", who, according to what she has said, are "urgently" requesting battle tanks.

"The Leopards that you have are in a sorry state, according to the words of Minister Robles herself, who, while boasting of Defense budgets, does not attend summits like Ramstein's," he emphasized.

In this sense, he has insisted that Ukraine "needs cars and not proposals for appeasement" like those made by Sánchez. "Don't you realize that our freedoms will only be guaranteed if Putin is defeated?" He warned, asking him if he would meet that demand or side with the Hungarian president, Viktor Orbán.

The PNV spokesman, Aitor Esteban, has also asked for the shipment of 'Leopard' to Ukraine and has criticized the indecision of Germany, France and also Spain. "Anyone who does not understand that European defense is at stake today in the fighting in Ukraine, either wants to amend the Summit agreements or is a smokescreen for their true intentions," he suggested.

For his part, the leader of Vox, Santiago Abascal, believes that "there is no European government committed to Ukraine and the defense of its sovereignty" that can "trust" Sánchez and his Executive. "You have to see his government and his partners to understand the mistrust every time he goes outside our borders," he pointed out.

In this sense, Abascal has accused Sánchez of having "prominent" members of the Puebla Group within the Government, whom he has accused of being "the great support" of Russian President Vladimir Putin in Latin America.

But in addition, he has maintained that the head of the Executive "does not have the legitimacy" to speak of common defense and security, since he came to propose the elimination of the Ministry of Defense and governs "with the heirs of the terrorists."

The spokesman for Unidas Podemos in Congress, Pablo Echenique, has stressed that his group has always been against the shipment of weapons that favor an escalation of the conflict, from the conviction that diplomacy is the solution to war and not the thesis of the PP asking for "tanks and more tanks".

In this matter, he has opined that "many red lines" have been crossed regarding the shipment of weapons and he has wondered if, now that tanks are being requested, the next thing will be to demand bombers or long-range ballistic missiles.

Both Echenique and his companion on the bench and leader of the IU, Enrique Santiago, have asked the president to be the "courageous voice of diplomacy in Europe", since the war is now in a "catastrophic tie with military escalation of unforeseeable consequences and with the involvement of nuclear powers".

Therefore, he has appealed to Sánchez that Spain can be a "peace power" and lead, on the eve of the community presidency that will be Spain's turn, a diplomatic path that achieves an armistice because this conflict "is not going to have a military victory". "Nothing is more worthwhile than reaching a great peace agreement to end the war," Santiago has sentenced.

The BNG deputy, Néstor Rego, has also criticized that the European Union continues to increase funds to provide weapons to Ukraine, which he believes "feed the prolongation of the conflict" and participate in a "dangerous dynamic" under the risk of a military conflict. between NATO and Russia. "The BNG is committed to peace and calls on the government to take a strategic turn that involves working through diplomatic channels to achieve peace," he requested.

‹ ›
Keywords:
Pedro SánchezUcrania
Your comment has been forwarded to the administrator for approval.×
Warning! Will constitute a criminal offense, illegal, threatening, offensive, insulting and swearing, derogatory, defamatory, vulgar, pornographic, indecent, personality rights, damaging or similar nature in the nature of all kinds of financial content, legal, criminal and administrative responsibility for the content of the sender member / members are belong.
Related News