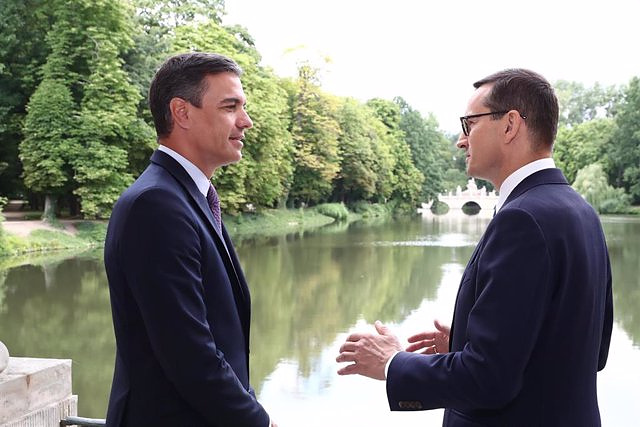 The President of the Government, Pedro Sánchez, suggested this Wednesday that Spain currently has the opportunity to become a liquefied natural gas hub and be an alternative to Russian gas for several European Union countries.

During a press conference in Warsaw together with the Prime Minister of Poland, Mateusz Morawiecki, on the occasion of the XIV Spanish-Polish Summit, Sánchez highlighted that Spain has the "most important regasification infrastructure in Europe" and that it is available to European partners with the aim that the continent "is not an energy hostage of Putin".

Sánchez explained that 30% of European regasification is located in Spain, which "is willing to increase solidarity" and the capacity to export gas to other European countries. In this sense, the president underlined that during the month of June, 20% of the imports of liquefied natural gas (LNG) that arrived in Spain were exported to third countries of the EU.

The head of the Executive has already spoken with the French Government and the European Commission to improve these interconnections and to turn Spain into "an alternative to the import of Russian gas by other countries in Central and Eastern Europe".

"Not only do we need to increase our gas export capacity, but we also have to face the challenge of saving energy that this potential threat to the whole of Europe of gas supply cutoff by Putin will imply," Pedro added. Sanchez.

On the other hand, the president has reviewed the energy saving plan approved by the Executive, which will soon be announced to the Spanish population so that it "can participate".

Likewise, Sánchez has assured that he is "satisfied" with the political agreement last Tuesday between the energy ministers to reduce gas consumption in Europe, a fact that he has described as "a good proof again of the unity and solidarity that they have to govern all policy decisions" in Europe.

However, the president has stressed the need to strengthen European energy policy, specifically the electricity market.

"We have been demanding that the electricity market be reformed and we are going to continue betting on the promotion of renewable energies to reduce volatility and give stability to electricity prices, which is so important for our fellow citizens and our companies", he commented. Sanchez.

‹ ›
Keywords:
Pedro SánchezUE
Your comment has been forwarded to the administrator for approval.×
Warning! Will constitute a criminal offense, illegal, threatening, offensive, insulting and swearing, derogatory, defamatory, vulgar, pornographic, indecent, personality rights, damaging or similar nature in the nature of all kinds of financial content, legal, criminal and administrative responsibility for the content of the sender member / members are belong.
Related News