The inter-parliamentary meeting will ratify Patxi López as spokesperson and will appoint the new leadership of the group in the Lower House. 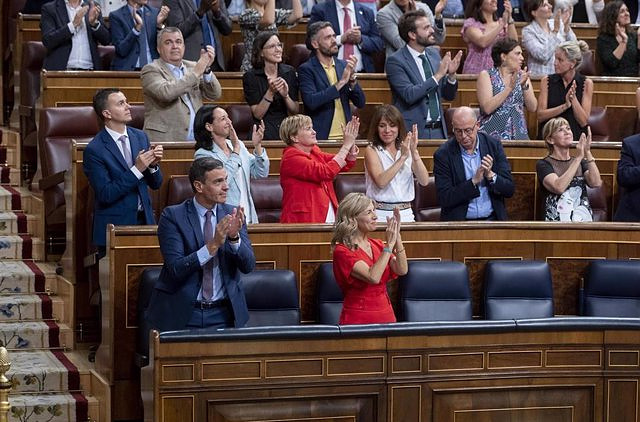 The President of the Government, Pedro Sánchez, is going to gather the Socialist deputies, senators and MEPs this Monday in the Congress of Deputies to mobilize them and seek a boost from the party for the next electoral year.

The interparliamentary meeting will also ratify the new spokesperson for the PSOE in Congress, Patxi López, who was appointed by Sánchez this summer in a sweeping remodeling of the Ferraz dome. He will also appoint the rest of the new leadership of the socialist parliamentary group, according to party sources in the Lower House.

Sánchez thus seeks to fine-tune his ranks and refine the political message for the coming months. The slogan is twofold, on the one hand the president will ask them to make an effort to explain the measures promoted by the Government and the positive effects on society, according to sources from the Executive.

In addition, the party is aware that they need powerful voices to protect the president and respond to the statements and attacks to which, in their opinion, the PP and its president, Alberto Núñez Feijóo, are subjecting them.

Therefore, the president is going to encourage his parliamentary bases with a clear underlying objective: to win the regional and municipal elections that are held next May and later, the general elections at the end of the year.

The party wants to recover from the latest defeats at the polls this year in Castilla y León and especially in Andalusia, where the PP won the first absolute majority of the democratic period. Also, turn around the polls that place the PP and Feijóo as the preferred option of the majority of Spaniards.

President Sánchez has already made the line of his message clear, since the Debate on the State of the Nation last July - when he announced new taxes on banks and electricity companies - which he now wants to reinforce at the start of the new academic year politician after the summer break: The defense of the middle and working classes against the economic powers linked, according to what he maintains, to the PP and Feijóo. Now it is the turn of the deputies and senators to internalize it and act as speaker.

Both the Government and the party have already taken previous steps in that direction. This past Monday Moncloa organized an act with fifty citizens in the presidential complex to show closeness to the concerns of the population. There, the Executive released a new motto -- 'We govern with you', which from that moment will appear in government acts and documents.

The PSOE also renewed its image by launching the slogan 'The Government of the people' after changes in the leadership of the federal leadership with the departure of the deputy secretary general, Adriana Lastra and the spokesman for the Executive, Felipe Sicilia. Both gave way to the Minister of Finance, María Jesús Montero as the new 'number two' and the Minister of Education, Pilar Alegría, as spokesperson.

Along these same lines, Ferraz announced that Sánchez would take to the streets with 30 party acts until the end of the year as general secretary of the PSOE to regain direct contact with citizens and better communicate the action that the Government has carried out so far. like future plans.

This tour began on September 3 in Seville and continued this Saturday 10 in Toledo in an act with the president of Castilla-La Mancha, Emiliano García Page, although it has been suspended at the last minute for agenda reasons. The forecast is that next Saturday 17 Sánchez will be in Zaragoza to celebrate the Federal Political Council together with the regional socialist presidents and the rest of the general secretaries of each territory.

The rest of the appointments are not yet closed but will go through the points on the map that Ferraz has marked in red as priority objectives in the regional and municipal ones. It is foreseeable, therefore, that there will be acts in capitals like Barcelona and Valencia, where the Socialists want to throw the rest, since at this moment they only govern in one --Seville-- of the five great Spanish cities.

‹ ›
Keywords:
Pedro SánchezParlamento EuropeoCongreso De Los Diputados
Your comment has been forwarded to the administrator for approval.×
Warning! Will constitute a criminal offense, illegal, threatening, offensive, insulting and swearing, derogatory, defamatory, vulgar, pornographic, indecent, personality rights, damaging or similar nature in the nature of all kinds of financial content, legal, criminal and administrative responsibility for the content of the sender member / members are belong.
Related News