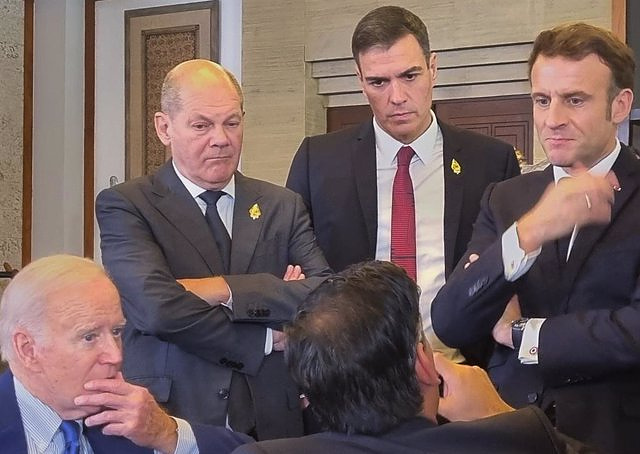 The President of the Government, Pedro Sánchez, held an emergency meeting this Wednesday with leaders of the G7 and NATO to address the impact of missiles on Polish territory that have claimed the lives of two people, all in fear that it is an attack on a member country of the Atlantic Alliance.

"Meeting in Bali (Indonesia), during the G20 summit, with our European partners and NATO allies to analyze what happened in Poland and Ukraine. All united so that peace returns," the chief executive wrote in a message published on the social network Twitter and collected by Europa Press.

The emergency meeting took place on the sidelines of the G20 summit that is being held these days in Indonesia -and to which the Spanish president has attended- with the intention of issuing a joint declaration in which he offers his support and assistance to Poland to carry out an investigation to clarify the incident on its territory.

"Today, the leaders of Canada, the European Commission, the European Council, France, Germany, Italy, Japan, the Netherlands, Spain, the United Kingdom and the United States have met on the sidelines of the G20 Summit in Bali (... We offer our full support and assistance with the ongoing investigation into Poland," world leaders said in a letter released by the US White House.

The heads of state and government have agreed to remain "in close contact" to determine "the appropriate next steps" as the investigation in Poland progresses, condemning in turn "the barbaric attacks" with missiles that Russia has perpetrated in the cities and civil infrastructure of Ukraine during the day on Tuesday.

"We reaffirm our strong support for Ukraine and the Ukrainian people in the face of ongoing Russian aggression, as well as our continued readiness to hold Russia accountable for its brazen attacks on Ukrainian communities, even as the G20 meets to discuss the broader impacts of war", wields the joint communiqué.

So far, the origin of the projectiles that have reached Polish territory has not been confirmed, although the president of the United States, Joe Biden, has ruled out that they were launched from Russia.

However, the Polish authorities have been able to confirm that the missiles are Russian-made.

Meanwhile, NATO has convened an emergency meeting of allied ambassadors this Wednesday to examine the incident registered in Polish territory, all this while Poland studies whether the premises are given to initiate the procedures to invoke Article 4 of the Atlantic Alliance.

Said article contemplates the call for consultations between allies when a member of the Atlantic Alliance considers that its territorial integrity, security or political independence are threatened. Since its creation, it has been invoked seven times, the last one following the Russian invasion of Ukraine on February 24.

‹ ›
Keywords:
PoloniaPedro SánchezOTANUE
Your comment has been forwarded to the administrator for approval.×
Warning! Will constitute a criminal offense, illegal, threatening, offensive, insulting and swearing, derogatory, defamatory, vulgar, pornographic, indecent, personality rights, damaging or similar nature in the nature of all kinds of financial content, legal, criminal and administrative responsibility for the content of the sender member / members are belong.
Related News