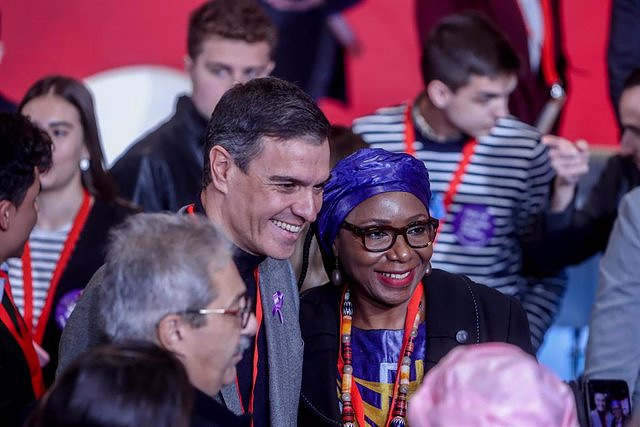 The President of the Government and Secretary General of the PSOE, has been appointed this Friday as the new president of the Socialist International, replacing the Greek Yorgos Papandreou who had been in office since 2006.

In his speech, before being appointed, he assured that social democracy has returned and is more alive than ever and that he wants to make the organization the common house of global progressive thought.

Sánchez has been nominated by acclamation -since his candidacy was the only one competing for the position- by the delegates of the 132 parties participating in the XXVI Congress of the Socialist International that started this Friday in Madrid.

The Ghanaian Benedicta Lasi --the first African woman to hold the position-- has also been appointed as the new Secretary General, replacing the Chilean Luis Ayala.

In his initial speech as host, Sánchez stated that he aspires to preside over the SI with the aim of making it the great ideological platform of the international socialist movement.

"I assume this responsibility with the firm commitment that together we will make the Socialist International the great common house of progressive thought and action worldwide."

‹ ›
Keywords:
GreciaPSOE
Your comment has been forwarded to the administrator for approval.×
Warning! Will constitute a criminal offense, illegal, threatening, offensive, insulting and swearing, derogatory, defamatory, vulgar, pornographic, indecent, personality rights, damaging or similar nature in the nature of all kinds of financial content, legal, criminal and administrative responsibility for the content of the sender member / members are belong.
Related News