He again asks Feijóo not to be so aware of the conservative media and provide solutions to the country's problems. 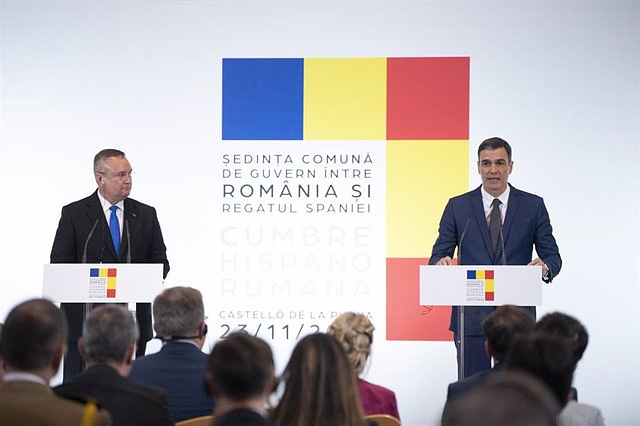 The President of the Government, Pedro Sánchez, has defended today the agreement reached with Bildu, by which the Traffic powers now held by the Civil Guard will be transferred to Navarra, and has accused the opposition of wanting Spain to break up and sink . In addition, he has once again insisted on asking Alberto Núñez Feijóo not to be so aware of the conservative media and provide solutions to the country's problems.

This was stated in Castellón, in a joint press conference with the Romanian Prime Minister, Nicolae Ciuca, with whom he had a meeting within the bilateral summit of the two countries in this town of the Valencian community in which 6 ministers have participated for each country.

When asked about the agreement with Bildu to give his support to the General State Budget, and the accusations from the right of exchanging peace for prisoners, the head of the Executive has specified that "developing regional powers is complying with the Constitution" , in reference to the transfer of the Traffic jurisdiction to Navarra, agreed with this party, which will mean the departure of the Traffic Civil Guard from this CCAA.

But he has warned that it is not sinking but "on the contrary", because the economy is growing above the European Union average and creating employment despite the "very difficult circumstances" it is going through.

And he added that Spain is not breaking either, although it has made the PP ugly, which was at risk of breaking "back in 2017 when others governed." "Today, what we are doing is overcoming this trauma based on coexistence, demanding compliance with the Constitution and taking steps towards political détente in a territory as important to our country as Catalonia," he added.

Pedro Sánchez has also rejected the accusations that his Executive is "unstable" alleging that it will approve the third budgets "in due time and form". Some accounts that, according to the head of the Executive, are going to protect the middle class and workers with resounding social policies; a sheet of reforms and transformations that will allow the reindustrialization of the country thanks to European funds and an equitable distribution of the economic consequences of the crisis.

In relation to this last issue, he recalled that tomorrow the Cortes Generales are going to approve the taxes on large energy companies, financial institutions and large fortunes because, according to what he says, his Government "requires those who have the most to put up the shoulder" in such a difficult context in a context provoked by Putin.

However, he wanted to acknowledge and thank the efforts of financial institutions to alleviate the mortgage burden and thus protect more than one million homes. An issue that has served to criticize the PP once again, assuring that when the 'popular' governed, banks were rescued, while now they are asking the banks to "give a hand to those who are having a worse time". "That is the big difference between one administration and another," she snapped.

This intervention by Sánchez has been marked by constant reproaches to the PP and has also taken advantage of a question about when the Government is going to appoint its two magistrates for the Constitutional Court to blame the 'popular' for being in the current situation of lack of renewal of judicial bodies for "violating and not complying with their constitutional obligations for four years".

Thus, he has assured that he would like to have an opposition that is less denialist and closer to providing solutions to the problems of the Spaniards and "not so aware of the conservative media." "Maybe it's too much to ask for," she exclaimed.

Regarding the appointment of the two magistrates that the Government must make for the Constitutional Court, he has indicated that his Government will comply with the Constitution and will appoint them. But he has not specified the date on which he will do so despite the fact that the question was whether he would name the two magistrates in the Council of Ministers this Tuesday even if tomorrow's plenary session of the CGPJ does not name his own.

‹ ›
Keywords:
FeijóoPedro SánchezGuardia CivilBildu
Your comment has been forwarded to the administrator for approval.×
Warning! Will constitute a criminal offense, illegal, threatening, offensive, insulting and swearing, derogatory, defamatory, vulgar, pornographic, indecent, personality rights, damaging or similar nature in the nature of all kinds of financial content, legal, criminal and administrative responsibility for the content of the sender member / members are belong.
Related News