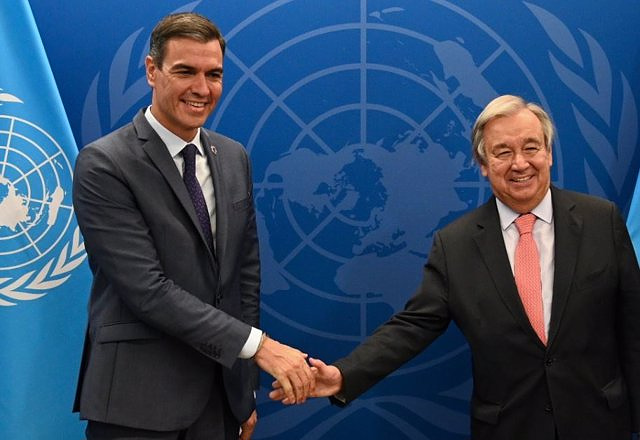 The President of the Government, Pedro Sánchez, met this Monday in New York with the Secretary General of the United Nations (UN) António Guterres, and conveyed Spain's commitment to the fight against the food crisis caused by the Russian aggression in Ukraine.

Both have met within the framework of the General Debate of the 77th session of the General Assembly of the organization and have addressed, in addition to food security, the war in Russia, humanitarian aid, the reinforcement of multilateralism, America's access America to international financing and Spain's presence at the UN.

To the four headquarters of the organization that hosts Spain, the GIGA technology center will soon be added in Barcelona, ​​​​the initiative of UNICEF and the International Telecommunications Union for the digitization of schools, collects a statement from the Presidency.

Sánchez stressed that Russia's actions pose a threat "not only to Europe, but to the world as a whole, as we have seen with the food crisis or the risks of a new nuclear catastrophe around the Zaporiya plant", has emphasized.

In this sense, the Government maintains its commitment to multilateralism as the only way to face the global challenges of the 21st century. In relation to Latin America, the head of the Executive highlighted the need to reform the international financing system and support vulnerable countries.

"I deeply thank the Secretary General for the role of the United Nations in the fight against the food crisis caused by Russian aggression. Spain will continue to support his work," Sánchez wrote in a message on his Twitter profile along with a photo shaking hands with Guterres.

‹ ›
Keywords:
Pedro SánchezOnuUcrania
Your comment has been forwarded to the administrator for approval.×
Warning! Will constitute a criminal offense, illegal, threatening, offensive, insulting and swearing, derogatory, defamatory, vulgar, pornographic, indecent, personality rights, damaging or similar nature in the nature of all kinds of financial content, legal, criminal and administrative responsibility for the content of the sender member / members are belong.
Related News