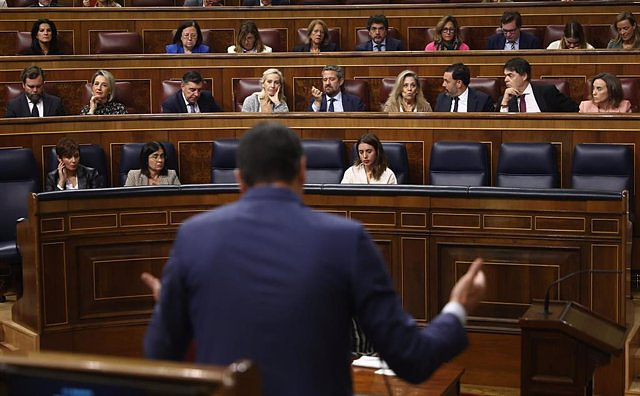 The President of the Government, Pedro Sánchez, has vindicated the "useful policy" that this Thursday goes ahead with the approval of the General State Budgets (PGE) in the face of the "crying" of those who only offer insults, referring to the attack by the Vox deputy Carla Toscano to the Minister of Equality, Irene Montero.

"Yesterday we saw an example of the worst of politics. That of insults and machismo," the chief executive wrote in a Twitter post, once again condemning the words of the Vox parliamentarian in which she stated from the rostrum of Congress that The only merit of the head of Equality is "having studied in depth" Pablo Iglesias, her partner and founder of Podemos.

After this episode, Sánchez already assured that denying sexist violence "is a way of exercising it" and "raising it on the rostrum of Congress is crossing an intolerable line", referring to Toscano's intervention.

With this message, he has once again launched a message of support for Montero, demanding a useful policy, "the one that today will go ahead with the

‹ ›
Keywords:
Presupuestos GeneralesPedro SánchezIrene MonteroVOX
Your comment has been forwarded to the administrator for approval.×
Warning! Will constitute a criminal offense, illegal, threatening, offensive, insulting and swearing, derogatory, defamatory, vulgar, pornographic, indecent, personality rights, damaging or similar nature in the nature of all kinds of financial content, legal, criminal and administrative responsibility for the content of the sender member / members are belong.
Related News