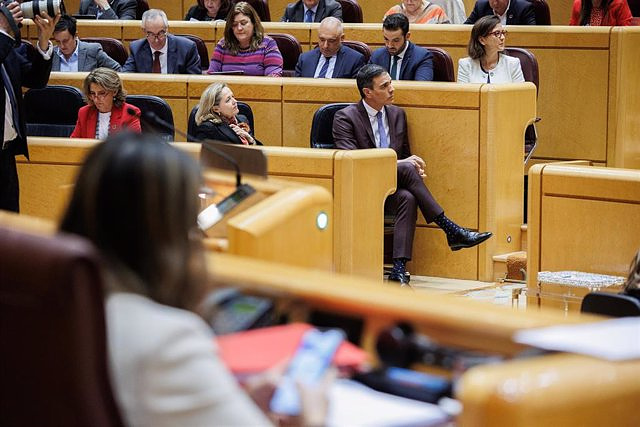 The President of the Government, Pedro Sánchez, has valued the agreement reached with EH Bildu, within the budget negotiation, to transfer the competence of Traffic to Navarra before March 31, and has apologized for the "speed" of certain transfers to the Foral Community.

This is how the head of the Executive has pronounced during the control session to the Government in the Senate, where the senator of Geroa Bai, Koldo Martínez, has asked him for explanations about the Improvement of Navarra and certain transfers on the same day that the Government has reached this agreement with Bildu.

As Sánchez has confirmed, the transfer of Traffic to the Foral Community will take place before March 31, 2023 and he has ensured that Civil Guard agents who want to continue in Navarra will be able to do so.

In any case, although at no time in his response has he named Bildu, Sánchez has given this example of a future transfer to Navarra to claim the transfers to the Foral Community, also highlighting the agreements reached to avoid unconstitutionality appeals.

As Sánchez has defended, in this legislature Navarra has already assumed two powers: that of prison health and the management of the Minimum Vital Income (IMV).

Of course, the head of the Executive has also admitted a "speed problem" in certain transfers, although he has blamed it on "the complexity of many of the transfers" that are intended to be carried out.

"What must be recognized is that the transfers to Navarra were paralyzed and with this government, with a legislature that has not been easy at all, we have made Navarra assume the management of the Minimum Vital Income or prison health," he added.

Precisely, Sánchez has made this explanation in response to the complaints of the Navarrese senator Koldo Martínez, who has recalled different announcements of when the Traffic jurisdiction is finally going to be transferred to Navarra, demanding "that it be as soon as possible".

"What these continuous announcements do is start to be taken as a chirigota", the Navarrese senator questioned Sánchez, who has warned "that there is no need for watermarks" to transfer Traffic to Navarra. In fact, he has once again insisted on this transfer so that the Provincial Police "is integral": "It is a necessity and an obligation."

Likewise, Koldo Martínez has mentioned the calendars managed by the current Minister of Culture and Sports and former head of Territorial Policy, Miquel Iceta, ironizing with his "dances", something that has found his defense in Sánchez

"Iceta is a good old companion, with whom I have shared many adventures, and I can guarantee that there is no better dance partner than Mr. Iceta", Sánchez has sentenced.

‹ ›
Keywords:
BilduPedro Sánchez
Your comment has been forwarded to the administrator for approval.×
Warning! Will constitute a criminal offense, illegal, threatening, offensive, insulting and swearing, derogatory, defamatory, vulgar, pornographic, indecent, personality rights, damaging or similar nature in the nature of all kinds of financial content, legal, criminal and administrative responsibility for the content of the sender member / members are belong.
Related News