The president and his Chinese counterpart are committed to deepening the relationship during the 50th anniversary in 2023. 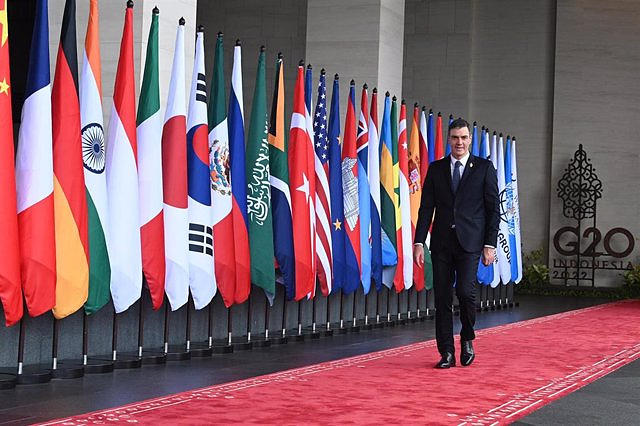 The President of the Government, Pedro Sánchez, has asked the president of China, Xi Jinping, to exert his influence to get Russia to end the war in Ukraine at the meeting held on the margins of the G20 summit in Bali ( Indonesia), as reported by the spokesperson, Isabel Rodríguez.

The meeting, which lasted about 40 minutes, allowed the two presidents to address the international situation, and in particular the war in Ukraine. In this sense, Sánchez has appealed to Xi to "use her influence as a stabilizing power" so that Vladimir Putin puts an end to the conflict, the spokeswoman indicated.

Likewise, they have spoken of the need to cooperate and seek solutions to the consequences that the war is having, especially in the field of energy and the food crisis.

As regards the Asian giant's relationship with the EU, Sánchez has conveyed to Xi the desire to give "a boost" to it during the rotating Presidency that Spain will hold in the second half of 2023.

At the bilateral level, the two presidents have agreed that the commemoration of the 50th anniversary of the establishment of diplomatic relations next year is "an opportunity to deepen the relationship between the two countries," Rodríguez reported.

It is also an opportunity to "intensify and diversify trade and investment relations", a point on which Sánchez insisted to the Chinese president on the need for "reciprocity for Spanish companies" in the Asian country. In addition, they have opted for greater cooperation in the commercial and tourism fields.

For his part, according to Moncloa, Xi has expressed his desire to deepen the Comprehensive Strategic Association between China and Spain that was agreed upon during his state visit to Spain in 2018.

The president has taken advantage of the meeting with Xi to congratulate him on his recent re-election as secretary general of the Chinese Communist Party and has sent him a greeting from the King and Queen, according to the images broadcast by Moncloa. "We have a very wide margin of manoeuvre" to continue deepening relations, he has maintained.

For her part, the president's wife, Begoña Gómez, who has accompanied him on this trip that will continue with a visit to South Korea, held a meeting on Tuesday with the first lady of Turkey, Emine Erdogan, as reported by the Presidency Turkey, which has published a picture of the meeting.

‹ ›
Keywords:
ChinaIndonesiaPedro SánchezBaliVladimir PutinUcrania
Your comment has been forwarded to the administrator for approval.×
Warning! Will constitute a criminal offense, illegal, threatening, offensive, insulting and swearing, derogatory, defamatory, vulgar, pornographic, indecent, personality rights, damaging or similar nature in the nature of all kinds of financial content, legal, criminal and administrative responsibility for the content of the sender member / members are belong.
Related News