He defends that the time to act is running out and warns that "there will be no peace while there is hunger". 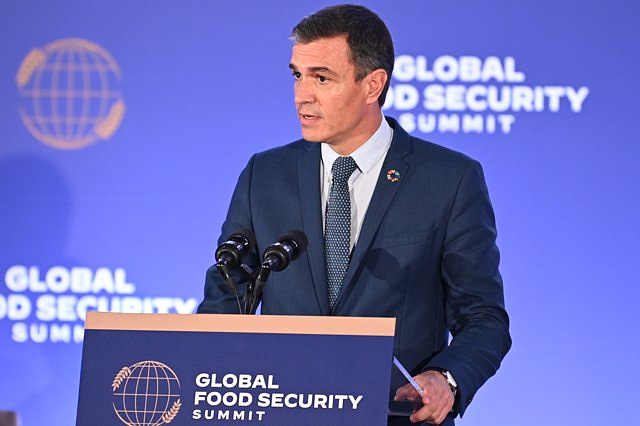 The President of the Government, Pedro Sánchez, announced this Tuesday that more than 230 million euros will be mobilized to deal with current food insecurity problems, while calling for a commitment to multilateral solutions, to better coordination and open and transparent trade.

Sánchez has stressed that food security is "a priority" for the Government, "but there is still a lot to do." Therefore, to "redouble efforts", Spain is going to donate 151.5 million euros and mobilize another 85 million in credits over the next three years, bringing it to a total of 236.5 million.

With this money, explained the president, "Spain will contribute to the work of specialized organizations as well as to the programs" of the Spanish Agency for International Development Cooperation (AECID). From Moncloa they have explained that the credits will be channeled through the Fund for the Promotion of Development (FONPRODE) of the AECID.

"If farmers do not get the fertilizers at the right time, bad harvests, or even the loss of them, will continue to worsen the situation," warned the Prime Minister.

In this sense, he has defended that "the only way" to overcome this crisis that has multiple causes is "through a multilateral approach", although he has also defended that "Russia must cease its illegal war" in Ukraine.

But, while we fight for peace, he has argued, steps must be taken to protect the most vulnerable. This happens, said Sánchez, in the first place by betting on multilateral solutions and greater coordination to be more efficient and avoid duplicating efforts with different initiatives, which should "align and complement each other".

Likewise, the President of the Government has opted for "an open and transparent commercial environment" and for eliminating obstacles to trade in agricultural products, including fertilizers, since restrictions on the import and export of this type of input are exacerbating the problem of food insecurity.

"As long as there is hunger there will be no peace and without peace there will continue to be hunger," Sánchez concluded his speech before a room that also included, among others, the German chancellor, Olaf Scholz, the president of Colombia, Gustavo Petro, and the Canadian prime minister. Justin Trudeau.

All those who have spoken during the opening ceremony have agreed on the need to act in a united and coordinated manner in the face of what Michel has branded as "the most important global challenge" of today. The president of the European Council has defended that it is not "acceptable" that millions of people go hungry and that many of them are even on the brink of famine.

The European official has placed special emphasis on the problem of the lack of fertilizers, arguing that addressing it should be a priority, especially in the case of Africa, and trying to promote its production on this continent.

Precisely, the Senegalese president has referred to this problem and has also compared the current situation with that after the Second World War, underlining that on February 14, 1946, the UN General Assembly adopted a resolution on "the world shortage of cereals and other products". "It seems that history repeats itself," he commented.

Sall has stressed that although this crisis affects all countries, it is the most vulnerable that suffer the most. For this reason, he has opted for "concerted solutions" and also for "guaranteeing the openness and transparency of the grain and fertilizer markets."

In turn, the US Secretary of State has recognized that no country alone will be able to solve this problem and has announced that US President Joe Biden will make new announcements of contributions tomorrow in his speech before the UN General Assembly. "Beyond what we say, what matters is what we do," he summed up.

The German chancellor also took the floor, warning that "the next few years could be even more difficult due to the rise in fertilizer and energy prices", while assuring that Germany is determined to continue fighting food insecurity.

The Colombian president has taken the opportunity to question the concept of food security, stressing that "income inequality" is not taken into account, which is what causes it. Likewise, he has defended the importance of food sovereignty and that it can become a right and be included in trade agreements.