Sánchez and Feijóo will star in the economic debate in the Senate, without the leaders of Vox, Ciudadanos and Podemos

The Upper House is ahead of Congress by opening the political course. 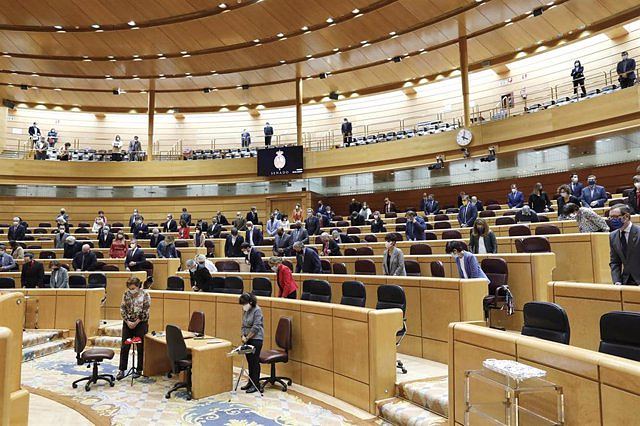 The President of the Government, the socialist Pedro Sánchez, and the leader of the PP, Alberto Núñez Feijóo, will star this Tuesday in a monographic debate in the Senate on the energy crisis and the economic context, an appointment in which the role of Vox, Ciudadanos and United We Can will be more secondary since its first swords cannot intervene in the Upper House.

The Senate thus advances in this beginning of the parliamentary course, since the Congress, which held an extraordinary plenary session in August to validate three decree laws and approve as many laws, does not plan to meet this week with its Board of Spokespersons and its first plenary session does not It will start until the 13th.

This debate on energy was claimed by the president of the PP, but the first reaction of the Government was to refer to the control sessions of the Senate. However, Sánchez ended up accepting the challenge and last week he asked to appear in the Upper House to "report on the Energy Savings and Management Plan and its territorial perspective, as well as its economic and social context."

Therefore, the debate is not limited to the decree law on energy saving measures that was already voted in Congress, but rather includes the design of that broader Contingency Plan that the Government must send to Brussels, as well as an analysis of the context economic of the country.

According to the organization of the debate, Sánchez will not have a time limit, while each parliamentary group will have 15 minutes for their first intervention and 5 for the second, with the exception of the Mixed, which has 18 and 6, respectively. The same scheme is followed that was used in the previous appearance of the Chief Executive, held in September 2020 and which lasted for almost six hours.

As if the times of bipartisanship were back, the debate will focus on the leaders of the two major parties, since Vox and Ciudadanos cannot count on their own and lack their own group, so they must share their time with other parties. United We Can has it worse, which will not intervene since it does not have senators.

The Senate is made up of 264 senators divided into a total of eight parliamentary groups, whose distribution is very different from that of Congress. Behind the Socialist and Popular groups, with 113 and 103 senators, respectively, appear far behind the group shared by Bildu and ERC (16 parliamentarians), the PNV (10), the Nationalist Group (6), the Confederal Left (5 ), the Democratic (4) and the Mixed (7).

Vox, which shares the Mixed Group with two independents, a senator from the Aragonese Party (PAR) and another from the Unión del Pueblo Navarro (UPN), will debut a new spokesperson in the Upper House, Pepa Rodríguez de Millán, appointed by the Andalusian Parliament.

Ciudadanos, for its part, now only has a single senator, Miguel Sánchez López, who is part of the Democratic Group, together with the two senators from Teruel Exists and the one from the Regionalist Party of Cantabria.

The president of the Senate, Ander Gil, has conveyed to the parliamentary groups the need for them to take advantage of this opportunity to offer "a useful and positive debate", away from tactics. "The most important thing is not the time of intervention, but the proposals," he said this Monday in an interview on TVE.

The debate will occupy the entire afternoon of Tuesday, since there will be no control session, no questions and no interpellations. The plenary session of the Senate will continue on Wednesday, with the approval of two bills that will be debated this week in a presentation: a bill for the creation and growth of companies and a proposal for an organic law to modify the Penal Code in matters of imprudence in driving motor vehicles or mopeds.

In addition to the debate on the bills, several motions as a result of interpellation presented by different parliamentary groups will also be discussed.

‹ ›
Keywords:
SenadoFeijóoPedro SánchezPodemosPPCiudadanosVOX
Your comment has been forwarded to the administrator for approval.×
Warning! Will constitute a criminal offense, illegal, threatening, offensive, insulting and swearing, derogatory, defamatory, vulgar, pornographic, indecent, personality rights, damaging or similar nature in the nature of all kinds of financial content, legal, criminal and administrative responsibility for the content of the sender member / members are belong.
Related News