Sánchez advances that employment in June will grow by 125,000 more workers 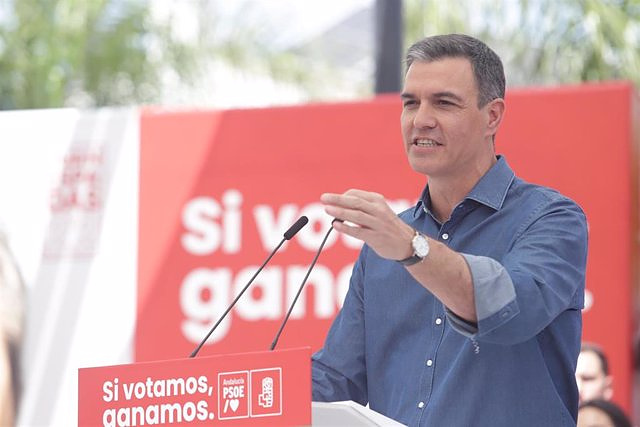 The President of the Government and Secretary General of the PSOE, Pedro Sánchez, has advanced that employment in June will grow by around 125,000 more workers, "doubling the performance of our labor market at the time of economic recovery prior to the pandemic."

"This shows that with a left-wing government, recovery from crises is faster and fairer", he claimed at a rally in Cártama (Málaga), in which he participated together with the general secretary of the Andalusian PSOE and candidate for the presidency of the Board, Juan Espadas.

Sánchez recalled that a few weeks ago there were "two very important economic data, although the right denies it": for the first time since 2008, Social Security registered more than 20 million affiliates and also for the first time since then Spain has less than three million of unemployed "It is still a high figure, but it is much lower than when the right governed," he stressed.

The President of the Government has assured that this legislature will be "the legislature of employment, in terms of quantity and quality", and as an example he said that job creation in June is proceeding "at an extraordinarily positive rate".

"The forecasts we have for this month of June, despite the war and despite the pandemic, is that we can create around 125,000 more jobs, that is, double the performance of the labor market in a month of June of the economic recovery that we had been having before the pandemic", he indicated.

‹ ›
Keywords:
Pedro SánchezPSOE
Your comment has been forwarded to the administrator for approval.×
Warning! Will constitute a criminal offense, illegal, threatening, offensive, insulting and swearing, derogatory, defamatory, vulgar, pornographic, indecent, personality rights, damaging or similar nature in the nature of all kinds of financial content, legal, criminal and administrative responsibility for the content of the sender member / members are belong.
Related News