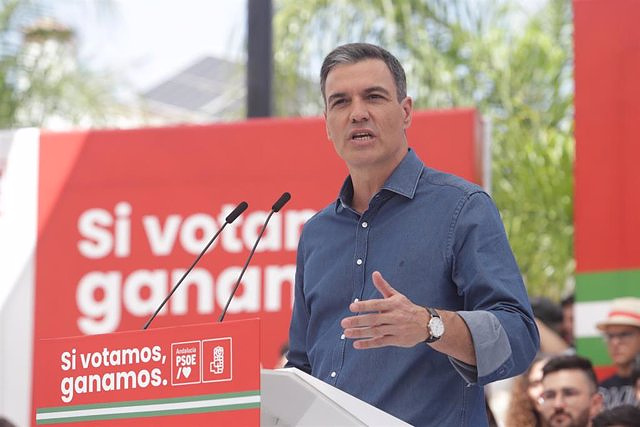 The President of the Government, Pedro Sánchez, has accused the Popular Party of "supporting third countries" in reference to the crisis with Algeria: "If a third country pressures Spain and the EU supports Spain, they support the third country that press".

This was stated at a meeting in Cártama (Málaga), in which he participated together with the candidate for the presidency of the Board, Juan Espadas, and in which he criticized the attitude of the popular, who "speak ill of Spain within and out".

Thus, in reference to the recent change of president of the PP, Sánchez has ironized that "it was not necessary for them to fire their leader", since it is "the same PP as always", the one that "blocks and denies any social advance to the country ".

In addition, he has also criticized the blocking position of the popular formation on other issues such as the gas cap or employment: "If the EU approves setting a price on gas, the PP does not support it. If employment is skyrocketing, they say that the data is made up".

The Algerian mission to the European Union denounced this Friday "precipitation" by the European Commission, by supporting Spain in the diplomatic crisis due to the suspension of the Treaty of Friendship and Good Neighborly Relations, after assuring that the step taken by Algiers it does not affect the agreement with the EU.

In this sense, the Spanish Government has shown its satisfaction with the rectification of Algeria after the support of the European Union with a statement from Brussels in which it warns that it is willing to "deal with any type of coercive measure" that it takes against one of its member states.

‹ ›
Keywords:
Pedro SánchezArgeliaPPUE
Your comment has been forwarded to the administrator for approval.×
Warning! Will constitute a criminal offense, illegal, threatening, offensive, insulting and swearing, derogatory, defamatory, vulgar, pornographic, indecent, personality rights, damaging or similar nature in the nature of all kinds of financial content, legal, criminal and administrative responsibility for the content of the sender member / members are belong.
Related News