Sánchez accuses the PP of playing with fear, questions the media and warns the electricity companies that Spain is not theirs

He claims that Feijóo does not act like a "shaman" and offers a "balanced" vision of reality. 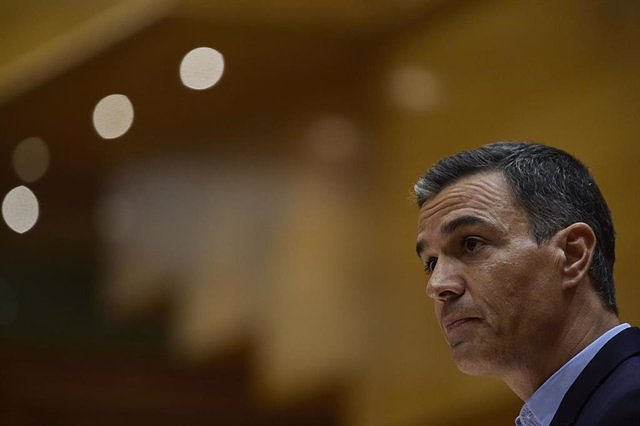 The President of the Government, Pedro Sánchez, has accused the PP of playing on the fear of the population and offering a catastrophic view of the economic situation, while questioning the independence of some media outlets and warning large companies, specifically to the electricity companies and the banks, that Spain is not theirs and that the popular will prevails.

In the debate that takes place this Tuesday in the Senate on the energy crisis and the country's economic situation, Sánchez pointed out that a political leader cannot act as a "shaman or a healer", in veiled reference to the president of the PP , Alberto Núñez Feijóo and must contrast what he perceives with data from experts and with what science shows to offer "a balanced view" of the situation. "What a political leader can never ever do is play on the fear of the population," he added.

Along these lines, Sánchez has sent a message of "calm" despite the current situation of "uncertainty" and has asked for confidence in the Spanish economy. Thus, although he has assured that there will be "additional measures" to save energy, they will not be "dramatic" since "there will be no rationing or apocalyptic scenes" such as those that, in his opinion, the right wing describes.

Thus, he has indicated that despite the current difficulties, any citizen lives "infinitely better than in 1973" despite the message sent by "the Bolsonaros, Le Pen and Trumps, who are also here" in Spain, he warned.

In addition, Sánchez has sent a message to the electricity companies and has assured that he will not allow them to "profit" from the current energy crisis: "No matter how much control they have of the media", he has launched, "however narrow whether their relationship with this or that leader or their surnames are very illustrious", he added.

In this sense, he has continued to charge against the companies by pointing out that it may be that by dint of seeing "their whim become law for years, they have come to think that Spain is theirs" although, as he has indicated, they are going to verify that the popular will that is expressed prevails through the vote in Congress and the Senate "and not in a few groups in Madrid".

However, Sánchez has pointed out that the Government does not feel animosity towards banks or electricity companies, although they consider that they should "put their shoulders to the wheel and contribute to the recovery at a time when citizens are having a hard time, because "part they owe their success to Spanish society", he maintained.

In addition, he has ironically addressed the PP bench: "You take it very seriously when we talk about big companies," he said.

Sánchez has also defended the measures that the Government has promoted in the European institutions, especially the Iberian exception, which has allowed savings of 2,000 million euros for households, companies and industries, as he has defended.

Thus, he has demanded that the 'popular' bench "stop being ridiculous" and stop referring to this measure as an "Iberian scam", since it represents a defense of the Spanish middle class.