Simeone: "The victory serves to correct, but the game was bad" 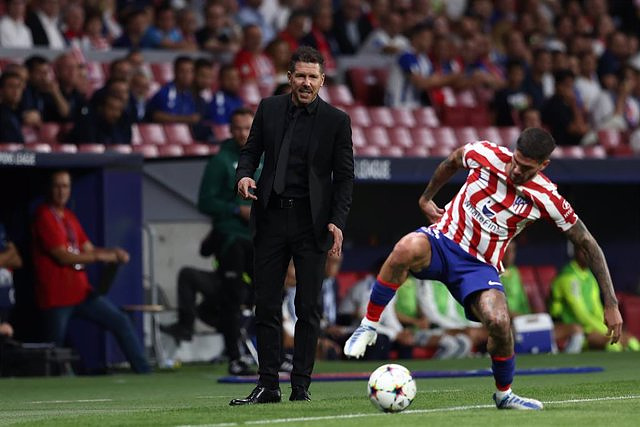 The coach of Atlético de Madrid, Diego Pablo Simeone, acknowledged that his team's match against Porto on Wednesday was "bad" despite achieving victory thanks to a goal in the 101st minute by Antoine Griezmann who is demonstrating his " hierarchy" despite not being able to play for too long.

"The victory serves to correct, but it is clear that the game was bad. We did not play a good game, there were no goal situations for both teams, one for them in the second half, but since the game there was very little", confessed Simeone at a press conference after the match.

The Argentine recognized that his rival was "better" at times, in which he surpassed them "in pressure" and in "who stole better". "They didn't let us because of his intensity and they didn't allow us to play, we didn't have the ability to overcome his intense pressure," he stressed.

"Then came Hermoso's half-lucky goal, it seemed that the game was on track with one more and we had to be calm and we didn't. We lost a simple ball and the penalty came that Oblak almost saved and we ended with an important goal, which It makes us happy because it's been a long time since we've done a set piece," he added.

The author of that winning goal was Antoine Griezmann, with whom he has "significant affection" and who, despite the fact that his last season was "somewhat irregular", has "tremendous" numbers at the club. "We hope that he is strong in the head. In these passages he serves us as we are using him and he is demonstrating in the quality of minutes, the hierarchy is seen," he warned.

In this sense, he does not give too much importance to the minutes that the Frenchman has to use for contractual issues. "Yes, we can see the realities. In 30 minutes he is doing very well, we don't know in 60, and now I am going for the realities," she said with a smile.

"That goal is very good for Mario (Hermoso). He has been looking to improve, but he is competing with Reinildo, who does not allow him the chances he is deserving," he stressed about the defender, author of the 1-0. "Joao Felix is ​​working very well and is much more mature, he needs to score a goal. We have to be calm because he has everything and we need him to be well and perform in the time the team needs him," he added about the Portuguese.

This was changed by Ángel Correr and the public of the Cívitas Metropolitano expressed their discomfort. "How is it going to annoy or surprise me. Joao is a very important player, but Correa too, we came out champions with him as a starter. I have many important ones, but sometimes bringing everyone together in the same game is not that easy and you have to look for the balance and what the team needs. Correa did something different, he was calm and different things were seen," said 'Cholo'.

Finally, Simeone, "beyond being his father", said he was "happy" with his son Giovanni's goal in Naples-Liverpool. "He has worked a lot to get to the Champions League that he has marked on his arm since he was a child," he stressed.