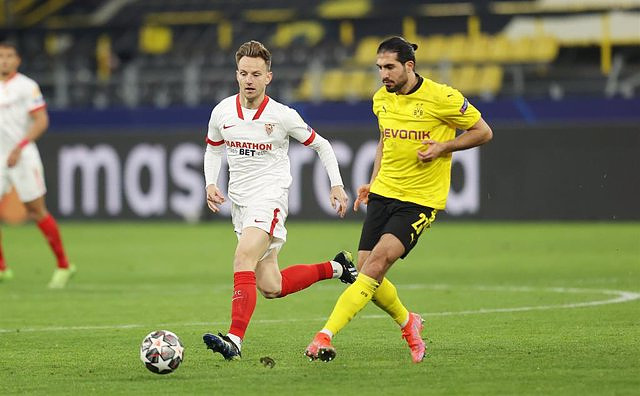 Sevilla FC begins a new season in the Champions League with more demands than ever, framed in a Group G in which Manchester City stands as the main favorite for first place and in which Julen Lopetegui's men will have to fight a priori for second place with Borussia Dortmund, his executioner from two seasons ago, all with Copenhagen as the most affordable theoretical.

For the third consecutive edition, the team from Nervión meets the best on the continent, and this time they hope to go one step further and forget the disappointments of the last two courses. If in the 2020-21 campaign he fell in the second round, last year he said goodbye to the first change in an affordable group stage in which he had been framed with Lille, Salzburg and Wolfsburg.

Without key men such as Diego Carlos, Jules Koundé or Lucas Ocampos, who packed their bags in the transfer market, the Andalusian team has had to rebuild itself again supported by names of guarantees such as Isco or Adnan Januzaj or bets such as Kasper Dolberg, with the who hopes to put up a fight in Europe.

However, fortune did not smile on him excessively and before him he will have giant challenges such as Manchester City, who already defeated those then led by Jorge Sampaoli in the 2015-16 season both away (2-1) and at home (1 -3).

Current champion of the Premier League, he was a continental semifinalist last year, where only the umpteenth 'magical' night at the Santiago Bernabéu prevented him from fighting in his second 'Champions' final, which was within reach in the 90th minute of the second leg.

Thus, the 'Orejona' continues to be the great dream to be achieved by Pep Guardiola's team, who brushed glory in 2021 in the final against Chelsea and who this time has been consciously reinforced to take it to the showcases of the Etihad Stadium, especially with the millionaire outlay for Erling Haaland.

The Norwegian has not wasted time since his departure from Borussia Dortmund, with ten goals in six Premier League games, and now he hopes to put his efficiency at the service of the 'citizen' team and take advantage of his competitiveness to reach greater heights in the top continental competition. where he hopes to terrify a Sevilla that he has already endorsed four of the five goals from the Germans when the Nervionenses were eliminated in the round of 16 in 2021.

The young Argentinian striker Julián Álvarez or the Englishman Kalvin Phillips have also landed in Manchester to shore up a midfield well led by Rodri, Kevin de Bruyne or Bernardo Silva who has finally stayed despite the interest of FC Barcelona. All will subject Lopetegui's men to a very tough test already on the first day of the group stage.

It will also be Sevilla's turn to face their ghosts with a new double confrontation with the co-leader of the Bundesliga, Borussia Dortmund, injured after Haaland's departure and still 'touched' after the Scandinavian's natural substitute, the Ivorian Sébastien Haller, left the team to be treated for a testicular tumor.

With the aurinegro team, if everything goes according to plan, the pass to the qualifying rounds will be played, although the Germans have lost potential compared to the last time they met when they won the first leg at the Sánchez-Pizjuán (2- 3) and tied at Signal Iduna Park (2-2), then with Sevilla player Thomas Delaney on the rival side.

Dortmund is no longer the most threatening, but coach Edin Terzic has been able to reinforce his attack with the Frenchman Anthony Modeste and the German Karim Adeyemi and shore up his defense with Nico Schlotterbeck and Niklas Súle, and has provided guarantees to his midfield with Salih Özcan. The veteran Marco Reus and the promising Jude Bellingham continue to be his main references.

The last of the members of Group G, FC Copenhagen, returns to the Champions League, which they had not stepped on since the 2016-17 academic year, with little to lose and much to gain, aware of their few options in a group of such caliber .

Coached by Jess Thorup, the Danish champions eliminated Turkish Trabzonspor in the last qualifying round, displaying offensive football and without speculation, although now they will be without Spanish Pep Biel, who left the team on his way to Olympiacos.

It does have in its ranks an old acquaintance of the Spanish fans like the Australian Matt Ryan, who defended the goal for Valencia and Real Sociedad. Again, Delaney is the only Sevilla player with a past in the Danish team.