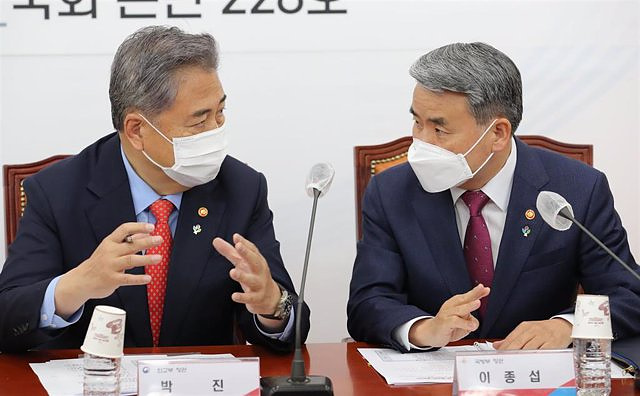 South Korean Foreign Minister Park Jin has confirmed that his country is considering imposing unilateral sanctions against North Korea if its neighboring country finally ends up carrying out a new nuclear test, as reported by the Seoul intelligence services.

The minister made these comments just before his trip to the United States to talk with his American counterpart, Antony Blinken, under the threat of what would be North Korea's seventh nuclear test.

"The government has dealt with the issue of applying unilateral sanctions against North Korea and is discussing various detailed measures," the minister said in comments collected by the official South Korean news agency Yonhap.

These comments also come after the United Nations Security Council was last month unable to reach surprisingly new sanctions against North Korea in retaliation for its continued missile tests since the beginning of the year.

China and Russia voted against a proposal whose failure raised serious doubts in South Korea about the reliability of the UN executive body.

The minister, once again, has echoed the intelligence information and has ratified that Pyongyang has completed its preparations for the nuclear test, the start of which could depend on the "political determination" of the leadership of the North Korean regime, in reference to the maximum country's leader, Kim Jong Un. .

If the nuclear test, which is widely anticipated, is carried out, Park has indicated that South Korea will coordinate with the international community to send a strong message to North Korea and respond with a "resolute posture of deterrence" against North Korea. the provocations.

Finally, Park has insisted that Seoul will concentrate on diplomatic efforts to persuade the permanent members of the Council, including Russia and China, to draw up a "firm resolution" against the North Korean authorities.

‹ ›
Keywords:
Corea Del NorteCorea Del Sur
Your comment has been forwarded to the administrator for approval.×
Warning! Will constitute a criminal offense, illegal, threatening, offensive, insulting and swearing, derogatory, defamatory, vulgar, pornographic, indecent, personality rights, damaging or similar nature in the nature of all kinds of financial content, legal, criminal and administrative responsibility for the content of the sender member / members are belong.
Related News