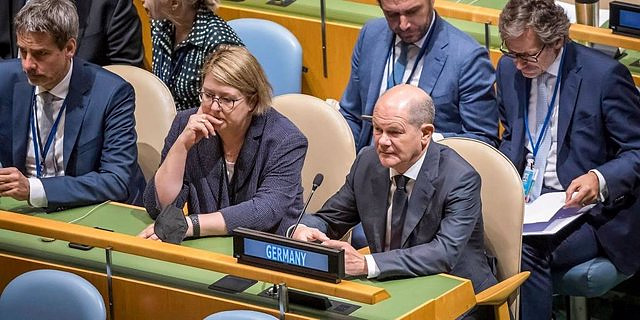 German Chancellor Olaf Scholz urged this Tuesday before the UN General Assembly to increase arms support for Ukraine, claiming that Putin will only give up the war "if he realizes that he cannot win."

"Putin will only give up his war and his imperial ambitions if he realizes that he cannot win," said the German president, adding that "he is not only destroying Ukraine, but he is ruining his own country," according to the dpa agency.

Scholz has assured that no "dictated peace" will be accepted, and that Ukraine must arm itself more to repel the Russian invasion: "We support Ukraine with all our might, financially, economically, charitably and also with weapons."

The chancellor has also argued that Russia's actions in Ukraine "are not only a disaster for Europe, but also for the global order and world peace."

"That is why it was so important that 141 states unequivocally condemn the Russian invasion in this room," Scholz said, referring to a UN vote in March following Russia's attack on Ukraine.

Scholz took advantage of his speech before the UN General Assembly to announce that Germany hopes to occupy a seat on the United Nations Security Council "if it receives the support of other members."

The German president wants to secure a non-permanent council seat for Germany for 2027 and 2028. Germany last sat on the council in 2019 and 2020, but because of its influence in Europe, it is often asked for a seat on the body. , which is designed to ensure that all regions of the world are represented among the 10 non-permanent seats, according to the aforementioned agency.

However, Scholz has reiterated his willingness to change the rules of the Security Council and give Germany a permanent seat.

"We have to make our rules and institutions fit the reality of the 21st century (...) Too often, they reflect the world of 30, 50 or 70 years ago. This also applies to the United Nations Security Council" , has added.

The Security Council is the most important conflict resolution body of the UN. However, as each of the permanent members has the right to veto, they are often unable to agree on key issues.

Since its creation, the Security Council has always had a seat reserved for Great Britain, China, France, the Soviet Union (now Russia) and the United States.

‹ ›
Keywords:
AlemaniaOnuVladimir PutinUcrania
Your comment has been forwarded to the administrator for approval.×
Warning! Will constitute a criminal offense, illegal, threatening, offensive, insulting and swearing, derogatory, defamatory, vulgar, pornographic, indecent, personality rights, damaging or similar nature in the nature of all kinds of financial content, legal, criminal and administrative responsibility for the content of the sender member / members are belong.
Related News