Scariolo: "We need a dose of energy to play the only way we are competitive" 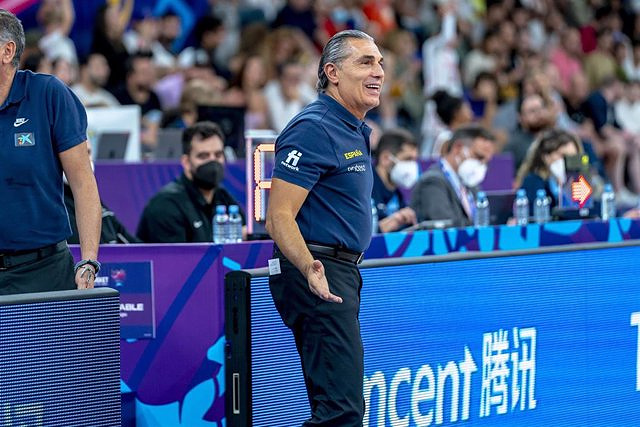 The national men's basketball coach, Sergio Scariolo, made it clear that they need "a sufficient amount of energy" to be able to be "competitive" in this Eurobasket 2022 and hopes to be able to "get resources from where there are none" in this Tuesday's duel against Montenegrin.

"We need to have a sufficient amount of energy to play the only way we are competitive, which is with a high pace, forcing mistakes, trying to run and moving the ball fast. This is very time-consuming, but it is the way to play against bigger and more athletic teams," Scariolo explained to the media after training.

The Italian knows that in order to execute his plan they need "a full recovery" after having played "three games in four days". "I hope we can find these resources because of course we have learned that sometimes you have to get them from where there are none and that is what will touch us a little against Montenegro," he said.

The coach of the national team insisted that now "the most important thing is physical recovery, especially for the most punished players and those who are a bit 'touched', as in the case of Lorenzo Brown".

The nationalized base has been "since the concentration dragging problems in the shoulder". "They are not tremendously serious, but they are limiting him quite a lot. We hope that he can help because for us it is essential to generate advantages, which is what we are looking for," he warned.

For his part, Xabi López-Arostegi confessed that the defeat against Belgium was "a bit disappointing". "We did not face it at the level of demand that we had the first two, we should have been with a higher degree of concentration. You have to be self-critical and know that there are two important games left and that you have to try to win them", he pointed out.

The forward recalled that although they are not "used" to playing so often, they must "'reset' very quickly, especially on a physical level." "We played against Georgia at night and with the adrenaline we finished we would go to bed at two or three in the morning, but it is not an excuse because we are professional athletes and we must prepare as well as possible", he pointed out.

"The group is very tight. We played a serious game against Georgia and with a full pavilion, and now we are going to prepare you mentally and physically and do our best to win," said López-Arostegi.