Scariolo: "We are where very few thought we could be" 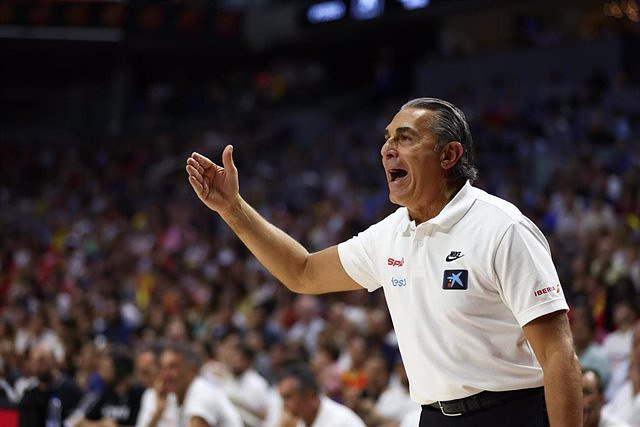 The Spanish coach Sergio Scariolo assured that the team has arrived "where few thought" that Spain could be, in the quarterfinals of the Eurobasket, where it has agreed after beating Lithuania 102-94 in an extra time that extends the "fairy tale" for which they now have to do "everything possible to keep it going".

"We are where just as few thought we could be, but we are. With merit, having earned it and now to rest, and to continue. Because it is a fairy tale and we do not want to finish it ourselves because we do not do everything possible to keep it going," Scariolo declared in Press conference.

The coach commented that "every day" they are "a little more convinced" of what the team can do if it maintains "the necessary intensity", giving as an example what happened in the first phase. "I remember that after beating Georgia on their court, it was days in a row, but we were mentally too empty to face the next game. We have a little more experience and I'm sure they've learned from it, I'm counting on them," he explained.

For Scariolo, "it has been overwhelming to see all this effort from this young team, nine players who had never been to a Eurobasket, overcoming great differences, 11 points at some point". "When we get the lead they overtake us again and we don't tremble, we resist, we find a way to win," he said.

"Even in extra time, we took advantage, they approached us and we pressed again, to fight, without losing faith in ourselves. People talk about the adjustments of the coaches, but you have to give credit to the hearts of these players, this is great, it is a pride, we have worked during the year, for many years to make these boys grow with the correct values, with the correct way of competing, of being together, of welcoming those who enter the group", he pointed out .

The Italian assured that "all this is beyond basketball", and that the fact of having managed to overcome Lithuania "is gratifying". "We are in the quarterfinals, we are one of the eight best teams in this championship with such a high level and now we are going for the next one, why not?" he added.

Sergio Scariolo spoke about Lorenzo Brown, who put the team behind him with 28 points and was instrumental in the victory. "The number of talent we have is what it is, so obviously the step forward is welcome, which may be, not every game, but today was his game and his teammates followed him, cheered him on and found themselves ready to converting his passes and for that reason the numerous assists he has given", he assured.

Another of the outstanding players was Rudy Fernández, who was very important in achieving the comeback in the last quarter. "Rudy has been an incredible leader the whole time we've been together, from day one, he's been a leader by example, helping young people, giving advice. He's been tough with them sometimes, when it's been necessary. He's helped Lorenzo (Brown) in different ways, he has helped me a lot with his feelings and I didn't even expect that," he said.

"He was a leader, but a little in the shadow of Marc, Pau (Gasol) or Ricky (Rubio), but now he is the only one left, so he has felt the need and has taken on the responsibility of uniting that team that It has already been finished with this one, which is growing, to transmit the legacy of the previous one to demonstrate what it means to be part of this team", valued Scariolo.

The coach also had good words for Usman Garuba, whom he insisted on keeping on track at decisive moments. "You have to go with your gut basically because you have to take into account who is on the court in the final minutes. Lorenzo had to lead the team offensively and Usman defensively, I trust him a lot," he said.

Scariolo stressed that Garuba is "a spectacular defender, he can change, he has a big heart and although he is young and still makes mistakes, he can grab great rebounds" and, "without him on the court", it is possible that Spain would not have won. "But we have to make him grow along the right path, we don't have to make him more than he is, we trust him, but at the same time we know that he still has a lot to improve, to learn from his mistakes," he said.

Now Spain will have to play in the quarterfinals against the winner of Finland - Croatia, although Scariolo does not dare to make predictions. "Honestly, I haven't been able to watch any of these teams yet, so it would be very generic. There are good teams, great teams, great players, NBA players, but in a couple of days I'll be able to be more precise."