Scariolo: "To win this group is to surpass what we expected" 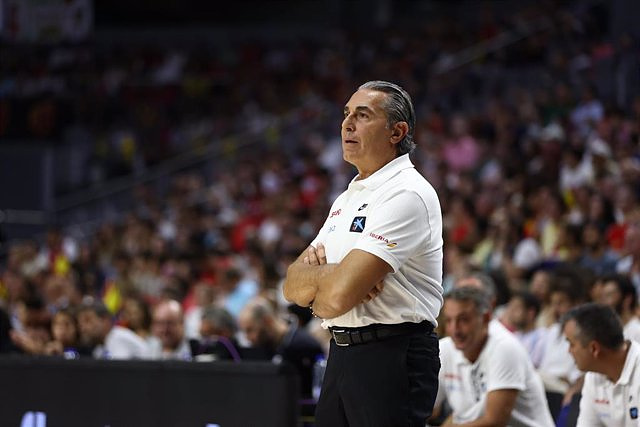 The national men's basketball coach, Sergio Scariolo, stated that the national team had completed a "great" game in the victory against Turkey, a victory that allowed them to advance as first in the group, which "exceeded what was expected" by the coach, who also praised the "cohesion" that exists in the group.

"We had a lot of respect for Turkey, with three NBA players and many EuroLeague level players and even MVP level players and we knew that we had to make it necessary for their important players to play more than 30 minutes because we were always there, competing, sometimes above, sometimes below, but connected to the game", he analyzed in a press conference about the rival of this last day of the Eurobasket group stage.

The coach wanted to highlight the "surprising" fight for the rebound during the duel, comparing the height between the two teams. "They double us up, and we've outplayed them and that's been a big key, because we haven't allowed their great shooters second chances and when our players were there creating a second chance or another possession it's been wonderful feelings," he added.

"Another great fact is that all the players have scored, everyone has scored. It is very difficult to get here with the twelve players, even though Rudy has not been able to play, and we also have three 'millennials' on the field and that is great. Even he (López-Arostegui) seems like a veteran and he's from '97. We've won the game, the group, a very tough one and now we can rest for a while. We've done what we had to do and now it's time to enjoy" , predicted for the future in the tournament.

Spain's rival will be Lithuania, "a great team with enormous size, great shooters, NBA players, Euroleague players, a huge bench." "They've got Kuzminskas back since we played. We have to be at the top of the cap to be able to compete against these teams, but we have to try," he said.

"Thinking that Lithuania comes fourth in that group makes you laugh a little. Five great teams, especially on a physical level," he said about Group B of the tournament.

For the coach, finish this phase leading the group and "overcome" what the coaching staff expected. "You have to give a lot of value and a lot of credit to the effort, because when one has not done something there is always a doubt and it is clear that they are acting at the limit of their possibilities and they are arriving and that has a lot of merit," he deepened.

"They are very cohesive and there is a very small moment when they think about themselves, most of the time they are thinking about their teammates and the team. Today there have been many tactical variations and in less than 24 hours they have been able to digest it, and that has a lot of merit. In principle, a good feeling that these players are asserting themselves, growing. It's not that one is becoming something different from what it is, but that they are getting one hundred percent. That is a reason for great pride for me as a coach," he said about the squad.

Finally, Scariolo argued why one also learns from victories. "If you recognize the effort you have made to win and you are willing to repeat it because it has gratified you, you can also learn from victories. But it is human that you react when you raise your voice, as happens at home with children, it is a bit the same , sometimes you have to do it. It is true that when you have to go to the limit for 40 minutes, at some point a break or a pothole touches you. Sometimes the damage is acceptable, as in this case, "he settled.