Scariolo: "This gold has a special and different flavor" 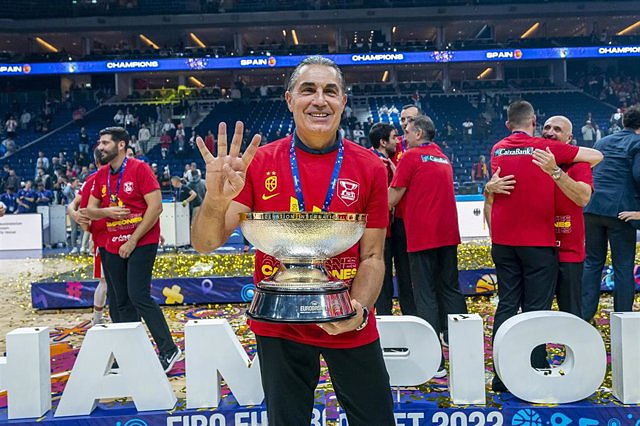 The national coach, Sergio Scariolo, acknowledged that the gold won in Eurobasket 2022 against France "has a special flavor" because "there is a lot of work behind it", and that he feels proud of having "left incredible teams behind" like his rival in the final, who was not given an option at any time.

"This one has a special, different flavour. I would say that there is a lot of work behind it, first in the clubs, with the youth programs and then with the Federation and the way to prepare this generation", declared the Italian at the conference. press after the victory against 88-76 against France.

Sergio Scariolo assured that he is "extremely happy". "We entered this tournament eighth in the 'Power Rankings' and we were gaining positions step by step. We have left behind incredible teams, the last one is an incredible team full of players from EuroLeague, NBA, top level, 'All-Stars ', and the other teams in this incredibly strong Eurobasket has been great, to see the final ranking and see that we are above those great teams", he valued.

The coach recognized that the fact that Willy Hernangómez ended up being the 'MVP' of the competition was something they needed if they wanted to be champions. "It's something we talked about at the beginning. We had to put someone on the top list, we didn't have anyone in the top 15 expected and I said 'I'm sorry, but you're the guy, so get off your ass and lead us and do it. ', and I'm very happy for him and his teammates. It's been a fun trip. We've played great basketball," he said.

Scariolo wanted to savor the triumph as if he were "just a basketball coach." "We have made great defenses, great attacks, the limitations that we had, that could be, that could lead us to be irregular, play at a low pace, but we have played great basketball, moving the ball, with a high pace, a lot of assists. , without selfishness, with the ability to overcome difficulties as a team and not just individual actions," he argued.

"I remember talking to Juancho before about how important it was to change his position between '3' and '4', just to give an example, they are situations that occur during the tournament and they have become a very efficient team and a great team on both sides of the court and I couldn't be happier as a coach", confessed Scariolo.

Looking ahead to the final, Scariolo explained what the plan had been in order to get France out of the game in which he feels most comfortable. "We knew we needed to find situations on the open court, because we knew we didn't have the height to take him into the paint. We played very well in the middle of the court, but I think a lot of points were needed in transition today, and we knew that if we did certain things we could force losses," he said.

The Italian pointed out that Spain had to build its "wall five steps further". "If they put us in the paint they were much bigger than us and we could suffer. I'm very happy with that stat, like the rebounds, because we tied with a much bigger team, and in the assists, because we got 24 assists, which that speaks of our offensive capacity," he added.

For Scariolo this has been the "most unexpected" medal, but not "the hardest". "Also in the World Cup they gave us fifth in the 'Power Ranking' at the beginning of the competition. The street fans don't do that, the professionals do, because they are based on the individualities that the teams present, but they will begin to find out that we also have something else on a collective level that allows us to multiply individual values," he said.

"I don't think it has been the hardest, although it seems strange to say it, I think it has been much harder on other occasions when we had another type of personality and merged players who had to change their role a lot compared to the one they had in their teams, to accept quite minor roles, to accept putting aside their egos, to allow themselves to be trained in a context in which almost nobody was entirely happy with the role they had because they had to sacrifice a lot of themselves," explained Scariolo.

The Italian confessed that, in those circumstances, he felt "more of a personal difficulty" than now. "This is playing basketball, and it is with players from whom it has not been difficult to ask for more effort, more concentration, because from day one I had no worries, complexes, demands, claims, everyone was working and doing team and it has been very gratifying," he said.

In one of his first Eurobasket he said that the Federation had given him a Ferrari, while now he joked that it is more "a Red Bull". "It's different, driving a Ferrari is tough, because you have to manage a lot of details on a machine full of very delicate parts. This year has been a bit tougher, even aggressive at times, because I think that was the way to drive this car. , compared.

"Always feeling that the players did not take offense at being driven hard, and we have been able to push, step on the gas a little more and do things that I would not dare to do before, but each situation is different, you have to adapt as a coach. The teams they are different, the strengths and the weaknesses and you have to try to maximize some and minimize the others", he deepened.

The players burst into the press conference to soak both Sergio Scariolo and Willy Hernangómez in water, something that the coach took with humor saying that he did not imagine Juan Carlos Navarro or Pau Gasol in that situation. "It's the face of having a young team, that nobody had been here before and they celebrate it, they enjoy it like a first time. The first times are always different, so you have to understand them", he commented.

Sergio Scariolo valued what was achieved, not only by the first team, but by all the lower categories in a dream summer for Spanish basketball, which has reached the nine finals of the tournaments where it competed. "We can't say we're going to do this every year, that's crazy, but the challenge is to stay competitive and teach the mentality. The talent will be better or worse, but the way of competing has to be the same, that's not negotiable for us," he said.