Scariolo: "Rudy has been injured and I don't know if he'll be back tomorrow" 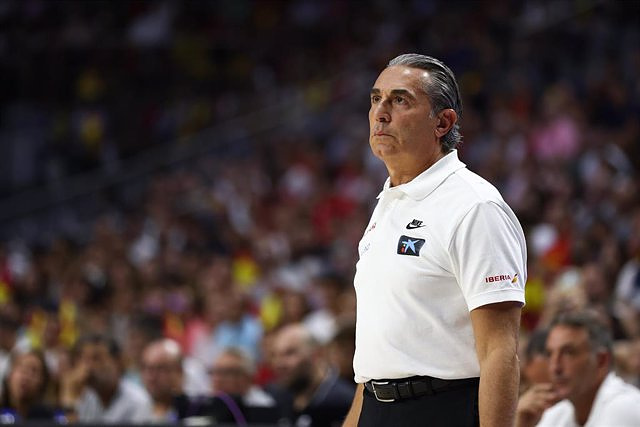 The Spanish basketball coach, Sergio Scariolo, has revealed that Rudy Fernández "has injured" his knee and that is why he has not played too many minutes in the victory against Montenegro (65-82), which has given them the pass for the round of 16 of the Eurobasket final, and has warned that if they play like they did in the last 15 minutes they are "a very vulgar team".

"Rudy has been injured, he has received a very strong blow to the knee, I have not given him rest. I have given Lorenzo rest," he declared at a press conference, without assuring whether he will have him in Wednesday's game against Turkey, in which the first place is played. "I don't know, I'll wait until they tell me something tomorrow," he added.

Before the momentous game against the Ottoman team, the Italian coach warned that it is essential "to know your strengths and weaknesses." "If you get drunk thinking about the strong points and you get depressed thinking about the weak points, you are off the road. And having the energy, the rotations and the contribution of many players so that such great wear can be spread over more and lengthen the number of games in which we can spend 32-33 minutes on court," he said.

"Tomorrow we have a 'back to back' and we have less time than the rival to recover. I hope that we can understand that recovery is a priority and that preparation, which is very important for us, is very limited and we have to multiply concentration," he continued.

In addition, he explained that with this meeting they have shown that they can "be competitive", but he issued a warning. "If we play like in the last 15 minutes, we are a very vulgar team," he said. "I am extremely happy to have got through the first phase, which was the goal," he said.

In another order of things, Scariolo analyzed the match of his players. "Willy -Hernangómez- is an essential reference, especially with a dynamic game, which is very fast and has a very good touch, it is very difficult to stop. Tomorrow there will be very big, tough and strong people in the static, who can put us the difficulty," he said.

"Dubljevic will have to hate me, because in the second game he scored five accumulated points. We showed Jaime -Pradilla-, who knows him well, Shengelia's defense with him. He has done very well, he has competed for the position, he has denied the easy reception near the basket, he made the foul when he had to... He did a great job, and that is the reason why he started today and the reason why he is deserving of an important role in the team".

Lastly, he broke down the work of Garuba and Juancho Hernangómez. "Usman has done well in the first half, he has done badly in the second half. Juancho, within today's approach to stop Dubljevic, has been a little sacrificed, but when he came in he has done very well; he is on board, active and present," he said.

For his part, the international Willy Hernangómez highlighted the team's "good game", with 25 minutes "of very good basketball", and was sure that the team will be ready to face a new duel in just over 24 hours.

"We have the experience of having played a 'back to back' here a few days ago and I hope that we have learned the things that we do not have to do. It is a matter of resting, eating well, sleeping and preparing ourselves physically and mentally for the battle that we have. tomorrow against Turkey and to be first in the group. I hope that everyone rests, there is no pressure, and that tomorrow we can play more than 25 solid minutes and that we have options," he said.