Santiago (IU) rebukes the judicial associations that request the resignation of Montero: "They have no credibility"

The dome of the purple formation has closed ranks with the minister and demands support on the left in the face of the "hunt" it is suffering. 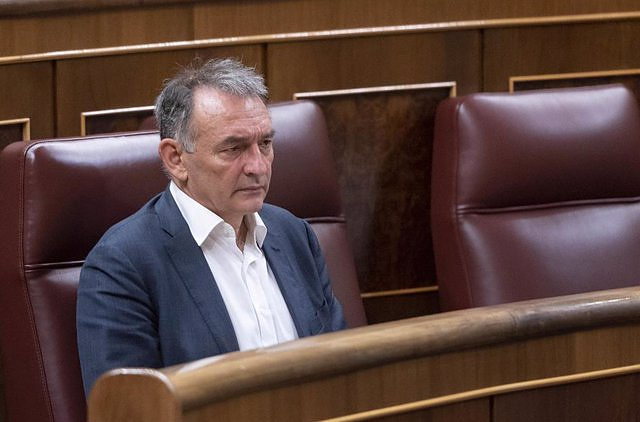 The general secretary of the PCE and leader of the IU, Enrique Santiago, has criticized that several judicial associations have demanded the resignation of the Minister of Equality, Irene Montero, after criticizing the judges who have reduced sentences for those convicted after the implementation of the Law of 'only yes is yes'.

"They do not have the credibility to request the resignation of the minister," he pointed out through a message on Twitter and in reference to the demand for resignation launched by the Professional Association of the Magistracy (APM), the Independent Judicial Forum (FJI) and the General Assembly of the Francisco de Vitoria Judicial Association (AJFV).

And it has confronted that these groups, given the situation of the "kidnapping" of the General Council of the Judiciary (CGPJ) by the "political and judicial right", have not requested resignations "of the organizers of the constitutional breach, all known".

The dome of the purple formation has closed ranks around the head of Equality, has proclaimed that the law will emerge strengthened from this controversy, which is also serving to "portray" the progressive politicians who now crack down on the norm, after the position of barons of the PSOE and Más Madrid favorable to undertaking rectifications in the norm.

In addition, the parliamentary spokesman for United We Can in Congress, assured that in the face of the "hunt" for "execution dimensions" against Montero, the "obligation of any comrade is to support", thus sliding the request for support both from the confederate space and from sectors to the left of the PSOE.

The co-founder of Podemos, Juan Carlos Monedero, also alluded to the "dignity" of Podemos in the face of "furious attacks" on the one hand and "deafening silences" on the other, while former vice president Pablo Iglesias criticized the "cowardice" of a part of the Government that has not come out to defend Podemos.

However, the reproaches to the magistrates of the purple dome and Equality has motivated the critical response of the Balearic vice president and member of Podemos, Juan Pedro Yllanes, who has distanced himself from said strategy by calling it "reckless" and "verbal excess" to point to the machismo of the judges as the main reason for the reduction of sentences committed.

On the other hand, the response within the confederate space has cracked in relation to the attacks on judges, although the space as a whole endorses that the law is positive. Thus, the head of Universities, Joan Subirats (common) and the entourage of the second vice president, Yolanda Díaz, advocated prudence.

While the director of the Women's Institute attached to Equality, Toni Morillas, who is active in IU, demanded that the interpretations of the law "be free of patriarchal bias."

On the issue, the head of Labor has not yet spoken publicly and this Friday it is expected that she will attend the media during her visit to Valencia. However, sources around her revealed yesterday that "all be prudent" and that "the objective and spirit of the norm has always been clear", although it is necessary to analyze the judicial path of the law. In this way, they chose not to criticize the judges.

From the 'commons' Subirats also advocated caution and prudence yesterday, by betting on waiting to see how events unfold, although he understood that the first revisions of sentences would have generated the first reaction of Equality.

‹ ›
Keywords:
IUIrene Montero
Your comment has been forwarded to the administrator for approval.×
Warning! Will constitute a criminal offense, illegal, threatening, offensive, insulting and swearing, derogatory, defamatory, vulgar, pornographic, indecent, personality rights, damaging or similar nature in the nature of all kinds of financial content, legal, criminal and administrative responsibility for the content of the sender member / members are belong.
Related News