Salvini rules out that Russia is behind the government crisis in Italy: "It's nonsense" 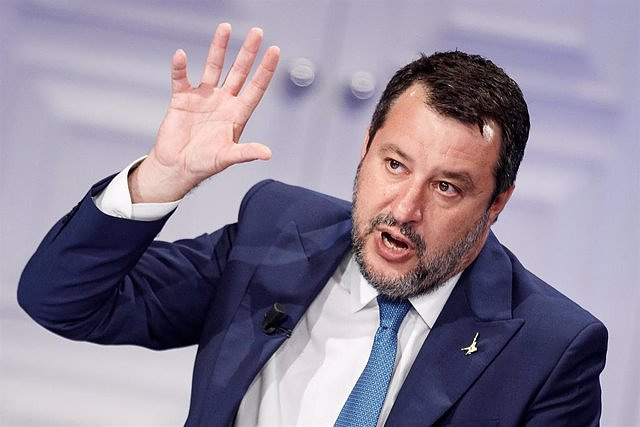 The leader of the far-right League party, Matteo Salvini, has ruled out this Thursday that the Russian authorities are behind the crisis unleashed within the Italian Government and that led to the fall of the now acting Prime Minister, Mario Draghi, who presented his resignation a week ago after losing the support of his coalition partners.

Salvini, who has asserted that the accusations against Moscow for allegedly influencing the country's internal politics are "nonsense", has stressed that Italy "is with NATO, but also seeks good relations with (Vladimir) Putin". "It is common sense that prevails," he has said.

"This is nothing more than nonsense. I have worked for peace and against war, which is causing deaths and economic problems for the whole world," he told the Radoi24 radio station.

In this sense, he has cleared up doubts about the alleged contacts between one of his advisers, Antonio Capuano, and several senior Russian officials, with whom he would have met at the end of May at the Russian Embassy to discuss the Draghi government.

"International politics is independent of governments," the former Italian Interior Minister clarified. "We are pro-European and Atlanticist, but this does not mean that we cannot have good relations with Putin. The war will end sooner or later and those who have made a mistake will pay," he continued.

In addition, he has insisted that he is a "reliable ally for the Italians, as well as for the leader of the Brothers of Italy party, Giorgia Meloni, and the president of the Forza Italia party, Silvio Berlusconi, with whom he has reached an agreement to face to the next elections, scheduled for September 25. "Common sense has won. (...) It is the president of the country who delivers the mandate, the Constitution says so, and what the Italians decide is sacred ", he has pointed out.

His words come after Draghi himself stressed the need to "take measures to combat the interference of Russia and other autocracies in internal politics and Italian society."

"Italy is a free and democratic country, so we have to respond to those who want to seduce us with an authoritarian model in order to reinforce European values," he said then in comments that were rejected by the Russian government.

‹ ›
Keywords:
RusiaMario DraghiItaliaSalvini
Your comment has been forwarded to the administrator for approval.×
Warning! Will constitute a criminal offense, illegal, threatening, offensive, insulting and swearing, derogatory, defamatory, vulgar, pornographic, indecent, personality rights, damaging or similar nature in the nature of all kinds of financial content, legal, criminal and administrative responsibility for the content of the sender member / members are belong.
Related News