The president defends that they have mobilized 2 points of GDP and that the measures will be extended until the end of the crisis. 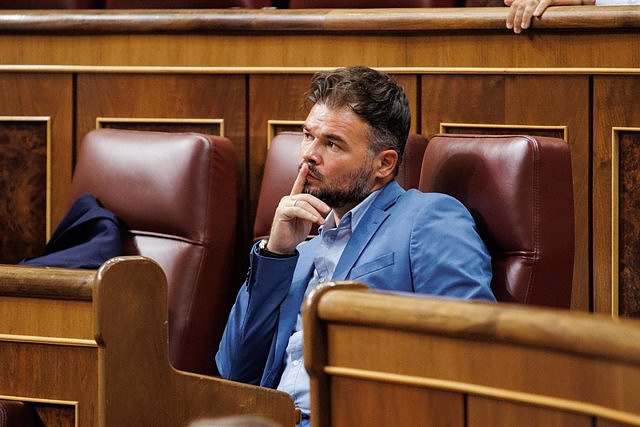 The ERC spokesman in Congress, Gabriel Rufián, has described the economic measures that the Government has been applying as "stingy and not very brave", although his group has supported many of them, and has urged him to create a rescue fund so that vulnerable families can pay their mortgages in the face of rising interest rates and thus prevent the right from sweeping the polls.

In a question addressed to the President of the Government, Pedro Sánchez, in the control session that is being held this Wednesday in Congress, he has demanded that he activate this fund because otherwise the right will become "increasingly stronger".

Rufián has warned that today there are already families who have the same fear as "10 or 15 years ago" of receiving the monthly mortgage receipt and that it is estimated that they could go up to 3 or 4 points, which means that a family that pay 500 euros, get to pay 1,000 euros, as he has warned.

Sánchez has responded to Rufián's initial question --whether he believes that the Government "really" is helping the people who are having the worst time, defending the volume of measures of the Executive.

Thus, he stressed that they have mobilized 30,000 million euros, which represents 2 points of national GDP, until December 31 and has assured that these measures will be extended for "as long as this crisis lasts."

Along these same lines, he has mentioned direct aid to affected sectors such as transport and primary education, the increase in scholarships for students and "selective" tax rebates that go "for the benefit of the working middle class" as international organizations such as the IMF mark, the OECD and the European Commission itself, as indicated.

In addition, Sánchez has stuck out his chest by pointing out that the European Commission's energy proposal "validates" many of the measures that Spain has been defending for a year, such as the intervention and reform of the electricity market or the creation of new taxes on oil and gas companies . As he has underlined, he also proposes the reduction of income from renewables and the cap on the price of Russian gas.

Therefore, he has insisted that "with all humility", in energy matters there is no government in Europe with more credibility than that of Spain. At this point, he took the opportunity to launch a criticism of the PP by describing it as a "paradox" that the European Commission has launched a proposal with new taxes while Alberto Núñez Feijóo's party "refuses to debate" in the Chamber the new taxes on banking and the energetic ones.

In his turn to reply, Rufián pointed out that although the ERC has supported many of his initiatives, they have always considered that they are usually "stingy and not very brave". Thus, he has questioned what is the use of a labor reform that, although it creates more and more permanent workers, are "increasingly precarious", since "60% of permanent contracts are part-time", according to what he has stressed .

Next, he has questioned the usefulness of subsidizing public transport if people are left "stranded" due to service failures, for example, in the Barcelona suburban network, as he has quoted. "What's the point of being on the platform for free," she ironized.

And regarding the measure of capping the price of the shopping cart, Rufián has blamed him for not talking among the members of the coalition Executive. "Even some do not even speak with their party", he has launched in reference to the second vice president, Yolanda Díaz.

CALVIÑO WILL STUDY IT

In his opinion, all of the above serves "to frustrate and disappoint" two feelings that are "the kryptonite of the left and the gasoline of the right, whatever flag they have," he warned. Along these same lines, he recalled that a few months ago he warned them that the price of food "was surely going to wipe them out" and today he does the same with variable-rate mortgages in the face of a possible rise in rates.

Minutes later, in the corridors of Congress, Rufián reiterated his request to launch a fund to deal with the rise in mortgages that, in his opinion, could cause "a social crisis of dimensions only known a few years ago", has moved in reference to the economic crisis of the previous decade.

In addition, he has revealed that the first vice president and minister of Economy and Digital Transformation, Nadia Calviño, told him that she was going to "study" the proposal, although the ERC spokesman thinks that the minister "believes too much in the good faith of the banks" , something that he considers a "bad thing", as he has pointed out. He finally insisted that if the left disappoints "we weaken ourselves enormously and the right takes advantage of it."

‹ ›
Keywords:
ERC
Your comment has been forwarded to the administrator for approval.×
Warning! Will constitute a criminal offense, illegal, threatening, offensive, insulting and swearing, derogatory, defamatory, vulgar, pornographic, indecent, personality rights, damaging or similar nature in the nature of all kinds of financial content, legal, criminal and administrative responsibility for the content of the sender member / members are belong.
Related News