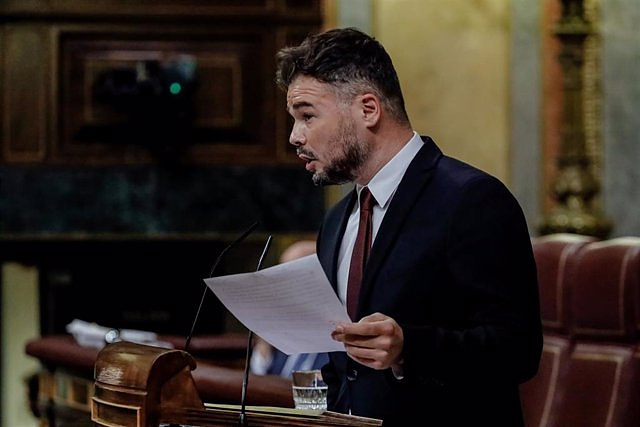 The spokesman for Esquerra Republicana (ERC) in Congress, Gabriel Rufián, has admitted that the candidates that the Government has chosen to renew its Constitutional Court (TC) magistrates "squeak", but has pointed out that they respect the criteria of the Executive.

This has been pointed out in an interview on Antena 3, collected by Europa Press, when asked about the appointments of the former Minister of Justice Juan Carlos Campo and the former adviser of Moncloa Laura Díez to renew the TC and that the Council of Ministers of this Tuesday.

"It is not the first time that the Government, which has the power to do so, appoints a former senior position. From the outside it can squeak, it squeaks," the ERC parliamentary spokesman has transferred.

Of course, he has assured that "it is not one of the worst" 'revolving doors' of politicians that there are "especially on the throne on the right of this country."

In any case, he has clarified that from ERC "they respect the criteria of the Government". "Surely there are other candidates, they have chosen this one, we will see how he does it", he has thus settled this matter.

‹ ›
Keywords:
ERCTribunal Constitucional
Your comment has been forwarded to the administrator for approval.×
Warning! Will constitute a criminal offense, illegal, threatening, offensive, insulting and swearing, derogatory, defamatory, vulgar, pornographic, indecent, personality rights, damaging or similar nature in the nature of all kinds of financial content, legal, criminal and administrative responsibility for the content of the sender member / members are belong.
Related News