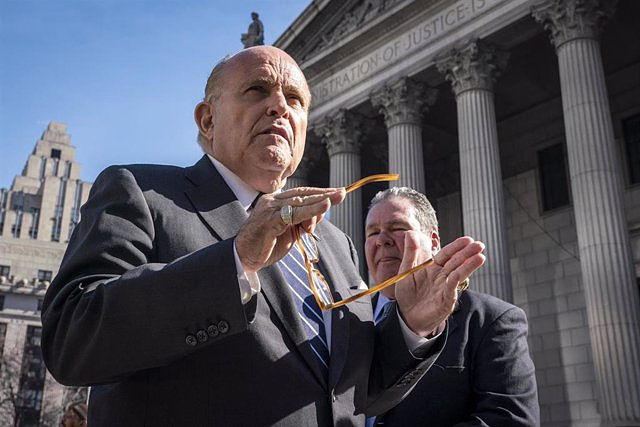 The former mayor of New York and one of the closest associates of former President Donald Trump, Rudy Giuliani, has been informed that he is being formally investigated for the alleged attempt by former US President Donald Trump to illegally prevent his electoral defeat in the November presidential elections. 2020 investigation by a grand jury in Fulton County, Georgia.

An attorney for Giuliani, Bob Costello, has confirmed the information to CNN. "This comes after we've asked them about six or seven times," Costello said.

Giuliani is summoned to testify before the grand jury next Wednesday, confirmed Costello, who did not want to specify whether he will accept the Fifth Amendment to avoid incriminating himself.

Giuliani himself was Trump's lawyer during the November 2020 electoral process, an election in which Trump was defeated by the current president, Joe Biden. Trump and his supporters unsuccessfully denounced voter fraud in court and maneuvered to try to prevent Biden's appointment. The protests culminated on June 6 with an assault on the Capitol.

Giuliani met with state congressmen from Georgia on up to three occasions in December 2020, one of them via videoconference, to spread lies about a conspiracy and alleged voter fraud. He thus accused two electoral officials of perpetrating rigging with votes in favor of Biden that they carried in suitcases, an extreme that has not been proven.

‹ ›
Keywords:
Estados UnidosGeorgiaDonald Trump
Your comment has been forwarded to the administrator for approval.×
Warning! Will constitute a criminal offense, illegal, threatening, offensive, insulting and swearing, derogatory, defamatory, vulgar, pornographic, indecent, personality rights, damaging or similar nature in the nature of all kinds of financial content, legal, criminal and administrative responsibility for the content of the sender member / members are belong.
Related News