Rudy Fernández: "You have to demand effort and attitude from this team, that would be my medal"

"These years have given me wisdom to instill everything I have learned from great players and legends". 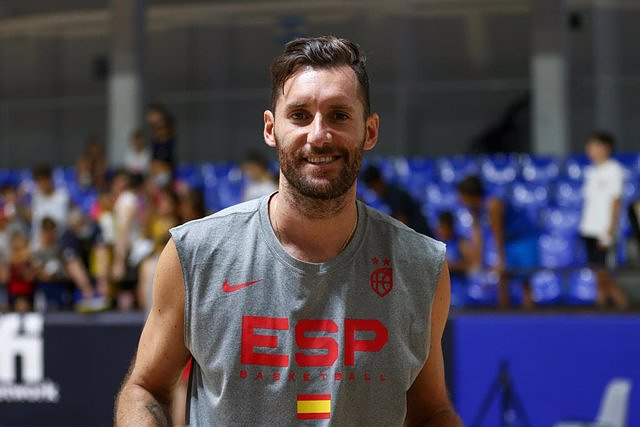 The forward and captain of the Spanish team Rudy Fernández insisted that the "reconstruction teams" now presented by the national team "should not be asked for a medal" in the Eurobasket, since he believes that it would be "selfish" on their part, but rather He asks them for "effort and attitude" on the court, while admitting that his long international journey has given him "wisdom" to instill everything he has "learned from great players and legends".

The 37-year-old player, captain of the national team, stressed that "it would be a mistake" to ask the youngest to "be at the top", after all the successes of 'La Familia' in the last almost two decades. "In Tokyo the goal was not reached. These last two decades, the selection has been spectacular, all the people have fitted very well into the group and then, when it comes to achieving goals, they have achieved more than they I thought," he commented.

The Balearic made his debut with the national team in 2004, when he began a golden era in the national team, winning two World Cups (2006 and 2019), three Eurobaskets (2009, 2011 and 2015) and two Olympic silver medals (2008 and 2012), among other successes. . Thus, remember how in the last world gold, in China, it was said that Spain faced the tournament "with a reconstruction team, because it was" the first time "that there was not a player from the successful generation of the 80 Pau Gasol, Juan Carlos Navarro, Felipe Reyes or José Manuel Calderón.

"But in that team were Marc Gasol, Ricky Rubio, the Hernangómez, and we believed in our work. Now it is different, we have lost two references like Marc and Ricky, and the veterans do not have to demand that the new ones be at the level of these players, but that they make an effort to try to be competitive", he highlighted about the work of the heavyweights in the locker room with the newcomers.

Thus, he evoked the 'hashtag' used by the national team media - 'La Familia' - to value the "tune" off the track and the "atmosphere" in the locker room as two pillars of the team. "The people who are entering are seeing the harmony that is outside, and inside the track is where the responsibility lies to try to do it well, but the good thing is the atmosphere that is created outside, that makes it special to come every summer", he highlighted, ensuring that "the desire has to be above everything". "And you're seeing it in training."

However, the ex of Joventut, Portland Trail Blazers and Denver Nuggets asserted that "success does not come from training and giving everything," and reiterated when it comes to removing pressure and responsibility from the "reconstruction" team that currently exists. "You don't have to demand success, you have to demand effort. It can go well or badly, but effort and attitude is our responsibility. Young people are adapting very well," he said.

"There are fresh legs and that in basketball is important. I am already 37 years old and I am noticing that each summer is more complicated. reading that I have cannot be had by Héctor (Alderete) or Juan (Núñez) due to that lack of experience", said Rudy Fernández, grateful for being "a lucky one to have lived so many years in the national team".

The Spaniard celebrated that the injuries have "respected" him, as well as that the coaches who have passed through the team since his debut in 2004 have seen that he could "help". "These years have given me wisdom to instill everything I have learned from great players and legends," he added.

Regarding the controversy with the incorporation of Lorenzo Brown, a Spanish national in July, in the call for this preparation for the Eurobasket that will begin on September 1, he stressed that "he is adapting well."

"He is going to be a very important player, he has had a great season in the Euroleague. I prefer Lorenzo, who leaves a passport to be with Spain, than other players who have tried to be and in the end have not been. As captain and competitor I am delighted to have a player like Lorenzo in our team," he said.

Finally, as one of Real Madrid's heavyweights, he addressed Pablo Laso's departure from the white bench "for medical reasons" after his acute coronary episode. "He has been a legend and a coach who has given everything, but we are club people and we owe it to his decisions", he admitted.

"This happens, it could have happened to me. Things could have been done better, but they are done, hopefully they can meet again and they can, one thank the club and the other thank the coach, who has done greater to the club", settled the Balearic.