Rudy Fernández: "It would be incredible to win a medal"

On the half-time harangue against Finland: "It wasn't a rant, it was a wake-up call". 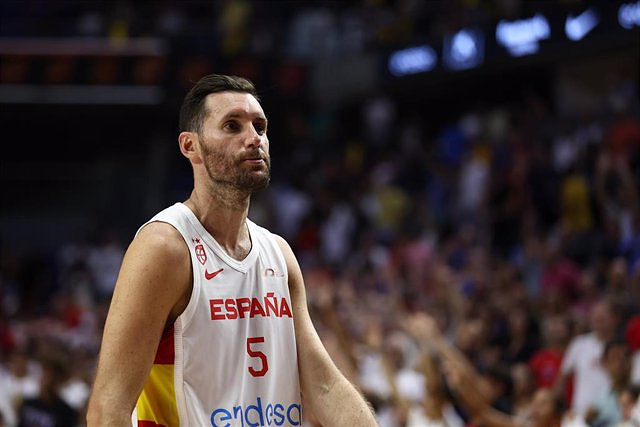 On the half-time harangue against Finland: "It wasn't a rant, it was a wake-up call"

The captain of the Spanish basketball team, Rudy Fernández, confessed that it would be "incredible" to win a medal at the 2022 Eurobasket and that the internationals "deserve" it because they are working humbly on the eve of the semifinals against the host Germany In Berlin.

"We have talked about enjoying this moment. This group deserves it because they are working with humility and it would be an incredible prize to achieve a medal. These guys deserve it, we started with 24 players as if it were a football team and these 12 deserve something good," he stressed at a press conference.

After qualifying to fight for the medals, Rudy Fernández declared that in the Spanish locker room he is "happy" and "enjoying this moment, being able to continue in this tournament and now whatever comes, enjoy this opportunity."

"As long as the team and I are wanting to play a semifinal, whoever is on the track has to forget about the pain, the 'whiplash' of this championship and face this semifinal because we don't know if we'll be in one again", highlighted.

The Spanish captain downplayed the harangue he gave his teammates at halftime in the quarter-final match against Finland, with which he lost by up to 15 points in the first half, and which served as a shock to Scariolo's team.

"It wasn't a fight, it was a wake-up call. Everything that had happened was not reflected in the first half. If we have something good in this group, it is that, when we have all been united in defense, we have achieved it and I told them that if we wanted to reach that semi-final depended on us", he revealed.

The key to the success of this national team without great stars, apart from Rudy Fernández himself and the Hernangómez brothers, is "humility". "Thanks to that humility, we are getting to where we have come. Now we play against a great team that is doing the best basketball in this Eurobasket. It's time to enjoy one of the best teams in Europe and with a full field," he said.

Despite the good defense exhibited by Spain in this European Championship, Fernández recalled that in other editions they also used this resource successfully. "It is true that I am getting older and I am forgetting things, but in many Eurobaskets we have made very good defenses. Against France we defended in an incredible way. Offensively we have many resources, although we do not have leaders like before. The pity is that we do not have Pau to score 40 points", he evoked in allusion to the role of the eldest of the Gasols who qualified Spain for the 2015 Eurobasket final by silencing 27,000 French people in Lille.