With the gold of Eurobasket 2022, he adds eleven medals with the national team. 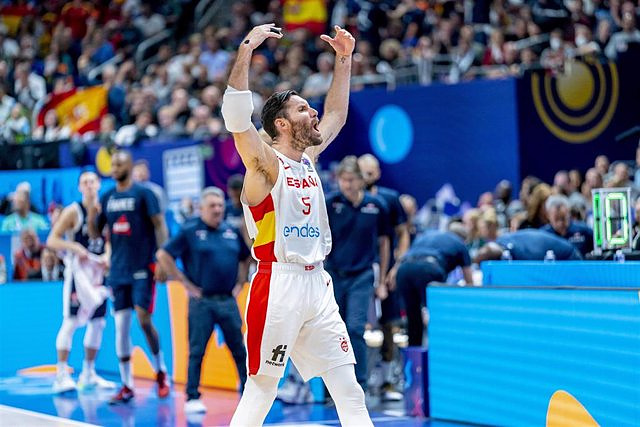 With the gold of Eurobasket 2022, he adds eleven medals with the national team

Eurobasket 2022 has marked a before and after in the career of Rudy Fernández, who has won the gold medal and has become, along with Pau Gasol, the player with the most metals in the history of Spanish men's basketball, with 11, six of which have been in European Championships.

The Real Madrid player has been the captain and spiritual leader of Sergio Scariolo's team and at 37 years old he has achieved one of the most unexpected medals in his entire international career, which began back in 2004. Since then, Rudy Fernández has won 11 medals , the same as Pau Gasol, the ceiling in men's basketball, although he would still have Laia Palau above him, who stood on the podium in international championships 12 times.

This is Rudy Fernández's sixth medal in a Eurobasket. To today's gold we must add the titles won in Poland 2009, Lithuania 2011 and France 2015, silver in Spain 2007 and bronze in Slovenia 2013. The Mallorcan has played a European seven times, winning metal in all except 2005.

In addition, the final has served Rudy Fernández to become the player with the most appearances in the entire history of the Spanish team, with 232, surpassing the 231 that Juan Carlos Navarro had defended the national team shirt. In addition, the Real Madrid player is also the one who has played the most Eurobasket games, 61, surpassing Pau Gasol's 58 and Epi's 59 along the way.

In the rest of the squad, only two players had already won a medal before winning gold in this Eurobasket, Willy and Juancho Hernangómez. The eldest of the brothers, the center of the New Orleans Pelicans, has been the top scorer for Spain in this Eurobasket and has achieved his fifth metal with the national team.

It is the third time that Willy Hernangómez has stood on the Eurobasket podium, which he won in 2015 and in which he won bronze in 2017. In addition, he was world champion in China 2019 and won the bronze medal at the Rio Olympics 2016. In the case of his brother Juancho, the spoils of the 2022 European Championship is his third metal with Spain. The man from Madrid had been present in third place at Eurobasket 2017 and at the 2019 World Cup.

The curious situation is that it is the first medal in the career of nine of the players from Sergio Scariolo's team. Lorenzo Brown, Alberto Díaz, Darío Brizuela, Jaime Fernández, Joel Parra, Xabi López-Arostegui, Sebas Saiz, Jaime Pradilla and Usman Garuba have worn metal for the first time in a major continental competition in which, for many, it has been the most important day of their careers.

‹ ›
Keywords:
Pau Gasol
Your comment has been forwarded to the administrator for approval.×
Warning! Will constitute a criminal offense, illegal, threatening, offensive, insulting and swearing, derogatory, defamatory, vulgar, pornographic, indecent, personality rights, damaging or similar nature in the nature of all kinds of financial content, legal, criminal and administrative responsibility for the content of the sender member / members are belong.
Related News