Ron denies his "participation" in the events investigated by the judge of the 'Popular case': There is no "reprehensible conduct"

He sends the judge two reports that would dismantle some of the conclusions included in the expertise requested by the magistrate. 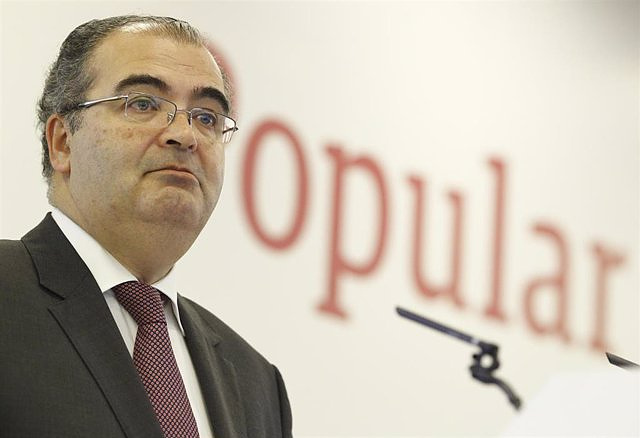 The former president of Banco Popular Ángel Ron has denied his "participation or intervention" in the events on which the judge of the National Court José Luis Calama has put the magnifying glass throughout the investigation, assuring in turn that there is no "conduct that is reprehensible from the criminal point of view" in the period in which he was in charge of the entity.

In a letter sent to the Central Court of Instruction Number 4, and to which Europa Press has had access, Ron distances himself from the financing of shares to clients, appraisals and operations related to the venture capital company Thesan Capital. "In each and every one of them," he maintains, he was not involved, "his knowledge of the facts being restricted" to the issues that were discussed in the Board of Directors.

These matters, on which the judge is investigating, would have been, according to Ron, "matters outside the Board of Directors, and in any case, outside the president of the entity, who, as evidenced by this investigation, was nourished by the information that arrived to the Council through the corresponding departments, and not the other way around".

Ron, one of the main investigators in this complex case, has sent the magistrate two relevant expert reports prepared by two Bank of Spain inspectors on leave of absence. The first of them analyzes the structure of Banco Popular's Corporate Governance, as well as the details of the prudential supervision carried out on the entity.

The second, for its part, is related to the extension of the expert opinion provided by the experts of the Bank of Spain on June 13, 2022. It was, specifically, an extension of a report that they themselves prepared in 2019 to in order to determine whether, at the end of 2015, there was a deficit of provisions by Popular and its "significance" for the bank's annual accounts.

Precisely, one of the pending proceedings in this case is the ratification by the experts of that extension, for which they are summoned on September 14. Thus, Ron asks the instructor for the instructor to summon the expert on leave, José Antonio Iturriaga, who has prepared the report that he now provides, so that he can ratify it jointly with the other two experts.

The former president of the bank considers Iturriaga's statement in court to be relevant, insofar as his report reaches conclusions that differ from those of the expertise submitted to the judge. The document prepared by Iturriaga, specifically, "evidence that there are no accounting deficiencies in the financial statements for the year 2015, contrary to the possible interpretation of the conclusions that are expressed in the OSI, and contrary to the interpretation made by the inspectors of the Bank of Spain".

And it is that, Ron explains, "as stated in the well-deserved expert report, the nature and purpose of the periodic inspections of the European Central Bank is prudential and prospective, and not accounting, as it was during the 2014 financial year".

"Reason for which, as they do not have the character of a totality or an overall review, but are limited to specific samples, which cannot be extrapolated or follow statistical criteria, there is no room, under any circumstances, for the retroactive application of such results under accounting criteria. , adulterating, in another case, the literal tenor of the regulations, and generating an artificial result as a consequence of the improper retrospective exercise, which, in our opinion, invalidates the conclusions of the report of the Bank of Spain, if with this it is intended to prove an alteration accountant", they denounce.

Regarding compliance with corporate governance in the entity, the former president maintains that the bank had "solid procedures and a clear organizational structure with well-defined, transparent and coherent lines of responsibility."

On the other hand, and referring to the prudential supervision of credit institutions, Ron denies the "existence of accounting distortion" while assuring that "during the years 2014 to 2016 there were no breaches in corporate governance or internal control" in the entity.

Regarding the financing of treasury shares, the defense of the former president explains that the content of the minutes of the meetings of the Board of Directors does not show that the members of the same were aware of the financing linked to the purchase of shares of the increase.

This writing by Ron comes two weeks after the instructor agreed to extend his investigation for another six months into the alleged accounting irregularities of Banco Popular in 2016 and the leaks to the press that would have caused the resolution of the financial institution in 2017, due to the " extraordinarily complex nature" of the case.

In addition to the aforementioned ratification in court by the experts, the judge is "pending to rule on the relevance of certain proceedings requested by one of the parties, a procedure that has been postponed until the expert reports are analyzed" that have not yet been They are over.

The legal sources consulted by Europa Press stress that these are the last steps before this case comes to an end, after five years of investigation.

‹ ›
Keywords:
Audiencia NacionalBanco Popular
Your comment has been forwarded to the administrator for approval.×
Warning! Will constitute a criminal offense, illegal, threatening, offensive, insulting and swearing, derogatory, defamatory, vulgar, pornographic, indecent, personality rights, damaging or similar nature in the nature of all kinds of financial content, legal, criminal and administrative responsibility for the content of the sender member / members are belong.
Related News