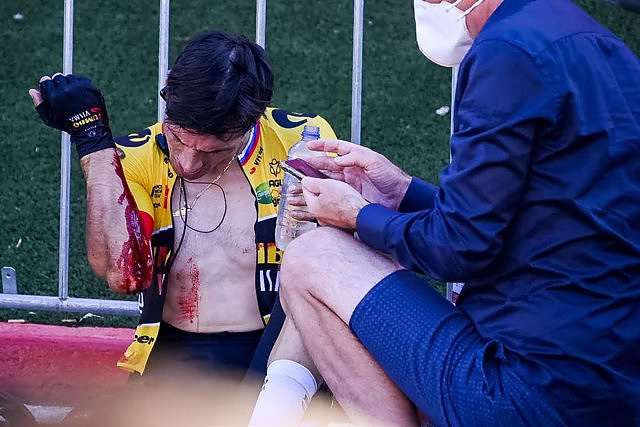 The Slovenian cyclist Primoz Roglic (Jumbo-Visma) will not take the start in the seventeenth stage of La Vuelta, after the crash he suffered in Tuesday's stage on arrival in Tomares, when the champion of the last three editions of the race was to the ground disputing the sprint for the stage victory, as confirmed by his team on social networks.

"Unfortunately, Roglic will not be at the start of stage 17 as a result of yesterday's crash. Get well soon, champion! Thank you for all the beautiful moments in this Vuelta, you had ambitious plans for the last few days, but sadly it will not be possible. Jumbo-Visma explained.

The organization of the Spanish round also sent a message of encouragement to the champion of 2019, 2020 and 2021, who will not be able to repeat his title in this edition. "You have given spectacle and ambition from day one. Get well soon, champion!" La Vuelta published on its social networks.

Primoz Roglic was in second place in the general classification, one minute and 26 seconds behind the leader, Remco Evenepoel (Quick-Step Alpha Vinyl), in addition to having achieved a stage victory. After the abandonment of the Slovenian, Enric Mas (Movistar) is second and Juan Ayuso (UAE), third.