Robles settles that military spending will rise to 2% of GDP: "That will be fulfilled"

He acknowledges that he does not understand that parties like Podemos "question" the decision of Sweden and Finland to join NATO. 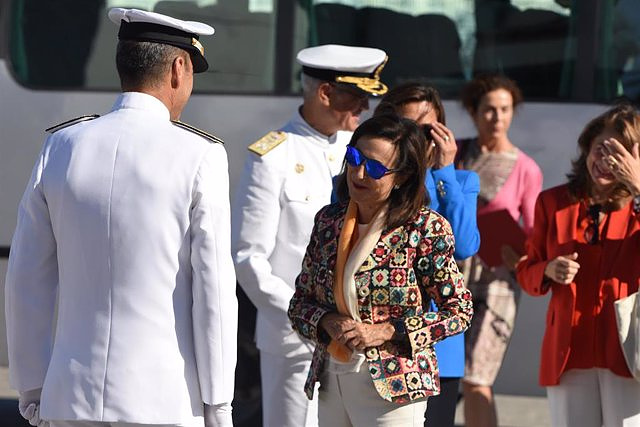 The Minister of Defense, Margarita Robles, has settled this Monday the debate on the increase in defense spending, recalling that it is a commitment of the President of the Government, Pedro Sánchez, and "that will be fulfilled" until an investment of 2% is reached of the Gross Domestic Product (GDP) in the year 2029.

"No matter how much we think about it, the Government's position is very clear and is marked by the Prime Minister," Robles stressed in an interview on TVE, collected by Europa Press, recalling that Sánchez has already said "on many occasions" that Spain will comply with the commitment made before NATO and the European Union to reach a military spending of 2%.

Robles has set the year 2029 to reach that budget (without specifying how much the increase will be in the next Budgets) and has claimed that investing in Defense means "investing in peace, security and democratic values".

At this point, he pointed to the defense industry, which could be one of the beneficiaries of this growth in investment, and recalled the importance that the sector also has for job creation. And he has also claimed that the war in Ukraine demonstrates precisely "that we must prepare to defend peace and values."

"It is an issue that no matter how many times we give it, the position of the Government and the president is clear and it is the one that all the democratic countries around us have taken," he settled, insisting on the commitment to the Atlantic Alliance.

In this sense, he has guaranteed that the Executive's commitment to NATO is "clear and unequivocal" beyond the division between the members of the coalition last week in the vote for the accession of Sweden and Finland.

"But the important thing is that the decision that came out of Congress is clear and resounding and the position of the Government of Spain that the president marks is also clear and unequivocal," he emphasized.

‹ ›
Keywords:
Pedro SánchezMargarita Robles
Your comment has been forwarded to the administrator for approval.×
Warning! Will constitute a criminal offense, illegal, threatening, offensive, insulting and swearing, derogatory, defamatory, vulgar, pornographic, indecent, personality rights, damaging or similar nature in the nature of all kinds of financial content, legal, criminal and administrative responsibility for the content of the sender member / members are belong.
Related News