The minister claims that "the only one responsible" for the deaths in Poland is Putin. 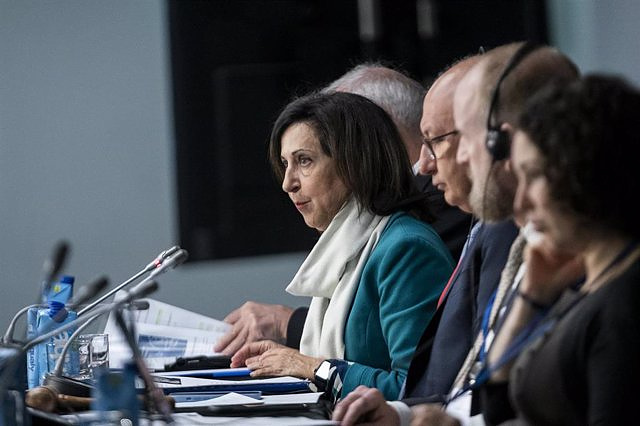 The Defense Minister, Margarita Robles, has announced this Saturday that Spain will soon make new arms shipments to Ukraine, which has taken advantage of a NATO parliamentary meeting held in Madrid to demand more military aid from the allied countries with which to combat the Russian invasion.

Robles praised the "bravour" of the Ukrainian people this Saturday before the NATO Parliamentary Assembly, a forum that brings together parliamentarians from all the countries of the Atlantic Alliance and a hundred members from 15 associated countries.

A Ukrainian representation has also traveled to Madrid, one of whose representatives has taken advantage of the presence of the Spanish minister to explain that her country needs more military aid "as soon as possible", such as the Hawk missile systems, of which Spain has already sent four launchers this month and is preparing to ship two more soon.

But the Ukrainian delegate has demanded more military aid from NATO countries, in the form, for example, of howitzers and mortars "which could be used very effectively by the Ukrainian Armed Forces."

In this sense, Robles has maintained that Spain has been sending material to Ukraine since the start of the invasion last February and has revealed that next week there will be a new "important" supply that he has not wanted to reveal for security reasons. In any case, he has assumed that one of Ukraine's needs right now is anti-aircraft defense and has assured that "in that line" they will continue to collaborate.

In addition, he has alluded to the missile that fell this week in Poland, which caused the death of two people, and has claimed that "the only one to blame" for this event is the president of Russia, Vladimir Putin. "The only person exclusively responsible for these deaths is Putin," he stressed. "Only Putin and this cruel war that he is carrying out has been and is responsible for the missile that caused the death," he said.

In this context, Robles has celebrated the "unity" shown by the NATO countries in the face of the Russian offensive and which was already reflected in the Alliance Summit held last June in Madrid. "Putin is failing not only because of the heroic resistance of the Ukrainian citizens but because of the unity of all NATO countries and the joint work with the European Union," he claimed.

In addition, he underlined the Spanish commitment to the Alliance and the will to achieve an investment of 2 percent of the Gross Domestic Product (GDP) in Defense by 2029. For now, he has recalled that the Budget project for next year already includes a budget increase that will allow it to reach 1.2% in 2023.

The Vox MEP Mazaly Aguilar has asked the minister if the Government has the consensus of the rest of the political forces to reach that percentage before 2030, before which Robles recalled that the Prime Minister himself, Pedro Sánchez, made this announcement at the NATO Summit and has argued that defense policy should not be subject to "partisan" interests.

Robles recalled that during the current legislature more than 13,000 million euros have been invested in defense programs. "I don't think that in previous years the situation of the Spanish Armed Forces would have been particularly careful," he slipped.

The minister has insisted on the need for this increase in the military budget because, in a global world, "no one can remain isolated" and must coordinate their actions with those of the countries around them.

"We have progressive planning, the military are always very precise, and the will of the Government of Spain is clearly expressed without any doubt by the President of the Government to reach 2% in 2029," he guaranteed.

In addition, he has indicated that "unfortunately" the war in Ukraine has shown that NATO is "more necessary than ever" and has emphasized its "complementarity" with the European Union. This is how he believes that the citizens understand him, he has pointed out the latest data from the CIS regarding the concern of the Spanish about the situation in Ukraine.

"We are all aware that as the war lasts, public opinion may feel alienated, but for now this is not happening. The attack on Ukraine is an attack on everyone's values ​​of peace, security, freedom and coexistence," he said. explained. "Today it is Ukraine that is attacked, but any of us can be attacked."

With this, he has called attention to the problems of Western countries to replenish the weapons they are sending to Ukraine and has asked if the defense industry is prepared to resupply all countries.

Given the possible shortage of raw materials, he has proposed a centralized purchasing system both by NATO countries and within the European Union similar to the one carried out during the pandemic for the purchase of vaccines.

‹ ›
Keywords:
UcraniaOTANFuerzas ArmadasMargarita Robles
Your comment has been forwarded to the administrator for approval.×
Warning! Will constitute a criminal offense, illegal, threatening, offensive, insulting and swearing, derogatory, defamatory, vulgar, pornographic, indecent, personality rights, damaging or similar nature in the nature of all kinds of financial content, legal, criminal and administrative responsibility for the content of the sender member / members are belong.
Related News