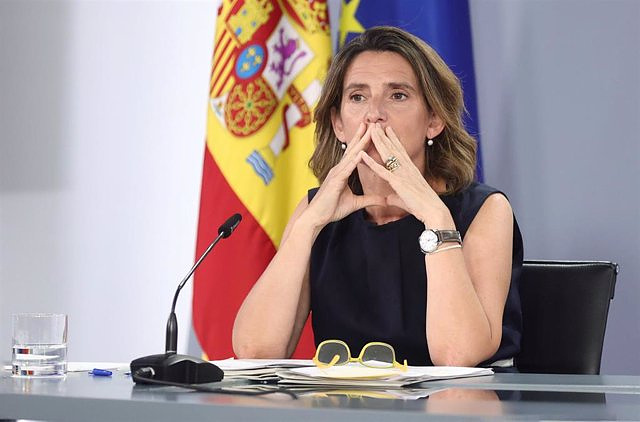 The third vice president and minister for the Ecological Transition, Teresa Ribera, has indicated this Friday that she sees an agreement at European level possible to limit the price of gas imported from Russia to the European Union, as part of the block's package of measures to face to rising energy prices and to secure energy supplies for the winter.

"Where I do believe that there is an important agreement is on something that has been discounted and that is the need to send a message to the gas that is exported from Russia by pipeline," the Minister for the Ecological Transition detailed when asked about it at her entrance. to the Council of EU Energy Ministers.

"I think there are some countries that do not support the idea of ​​limiting anything that comes from Russia. Not many", added Ribera, who clarified that "an immense majority of countries" understand that it is "important to measure well and take measures in that address".

"I think it is a sensitive issue. It is important to work well on the way in which the European Union and its operators can send a signal of what price we are willing to pay", added the Minister for the Ecological Transition when asked about the possibility to put a limit on the price of Russian gas, although he has clarified that it is an issue that is not yet mature. .

In this sense, the vice president has indicated that the consequences of such a measure are taken for granted taking into account the actions of Russia and, therefore, has urged to "work well" this proposal.

Ribera has indicated that this is a debate that "is going to open now" and has highlighted the importance of improving the transparency of the energy markets and understanding "what is the role of the 'traders', of the agents that exchange these materials raw materials", as well as the prices they buy and sell these raw materials.

"We must be clear about what is happening with the producing countries and if they are our allies," warned the vice president.

The person in charge of Ecological Transition has advocated increasing the transparency of the energy markets and "understanding how prices are configured and what is the role of the 'traders', of the agents that exchange these raw materials, at what price they buy it and at what price they sell it".

"If we have learned anything, it is that it is a very non-transparent market", he pointed out and indicated that the customs price is probably below the sale price that is reflected in the wholesale markets", for which he has asked "to improve In that aspect".

The vice-president highlighted the need to determine why there is "such a significant price differential", and gave, for example, the difference between the Iberian liquefied natural gas market and the Dutch TTF market, that of gas futures in Europe.

Thus, Ribera has invited to send "a clear message" and has focused on the fact that the situation "has a high speculative behavior and should be corrected in that conversation with 'traders' and with suppliers".

"I think this is going to be an interesting debate," he pointed out, although he recognized the difficulty of reaching "concrete" solutions because it is less advanced.

‹ ›
Keywords:
UETeresa Ribera
Your comment has been forwarded to the administrator for approval.×
Warning! Will constitute a criminal offense, illegal, threatening, offensive, insulting and swearing, derogatory, defamatory, vulgar, pornographic, indecent, personality rights, damaging or similar nature in the nature of all kinds of financial content, legal, criminal and administrative responsibility for the content of the sender member / members are belong.
Related News