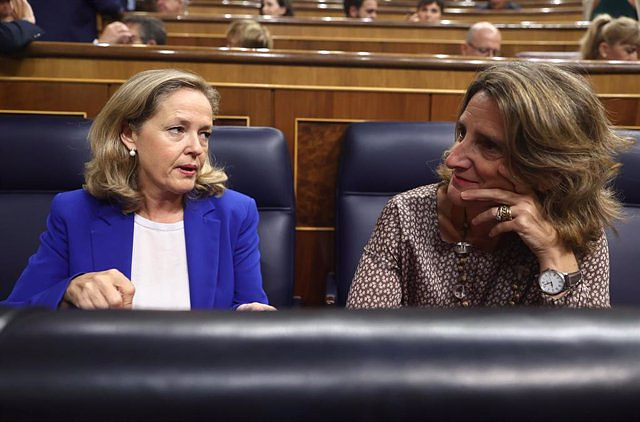 The Third Vice President and Minister of Ecological Transition, Teresa Ribera, has assured that consumers are paying between 20% and 30% less for the electricity bill than they would pay in the absence of the measures adopted by the Government and against of the PP criteria.

"Our consumers are paying between 20% and 30% less than what they would pay in the absence of the measures adopted by this Government and against the 'popular' criteria, but we also respond seriously and responsibly to the Union's request Union of being in solidarity with our neighbors in gas, electricity and economy and social support", Ribera stressed in the session of control of the Government in the Congress of Deputies.

In response to a question put by the 'popular' deputy Guillermo Mariscal, Ribera stressed that the Executive not only "respects and works" for compliance with the decisions of the European Union, but also contributes to identifying "early" and insist on the need for Europe to also respond to the energy crisis.

The Third Vice President and Minister of Ecological Transition has indicated that the 'Iberian exception' mechanism has allowed a reduction, compared to what could have happened in her absence, of around 20% in bills.

Said mechanism, as he has pointed out, has been complemented by the set of measures adopted by the Government "in advance", to which is added the opening of a "very important" debate on the energy crisis in a context marked by war of Ukraine that demands a response, at European level, "united, flexible and supportive".

In this sense, Ribera explained that 25% of electricity consumption in Portugal would not exist and would have to destroy demand, if there were no capacity to produce electricity and export from Spain to Portugal.

"What happens if we pay attention to this desire to extend the life of nuclear power plants beyond their design time, as is happening in France? That we would have to ask them to transfer to us all the electricity produced in all the neighboring countries, as is the case of France, whose most important hypothesis to get through this winter depends on the maximum export of electricity from all the neighboring countries to France", he added.

Finally, the 'popular' deputy asked Ribera if he agrees with the PSOE in the Parliament of Extremadura, which has supported the request to extend the useful life of the Almaraz nuclear power plant.

"I have not the slightest doubt that my fellow Extremadurans close ranks 100% with a program that is a national program and that makes a serious and strong commitment to the transformation of the energy system," Ribera responded.