Registrations in Spain accumulate a drop of 7.4% so far this year 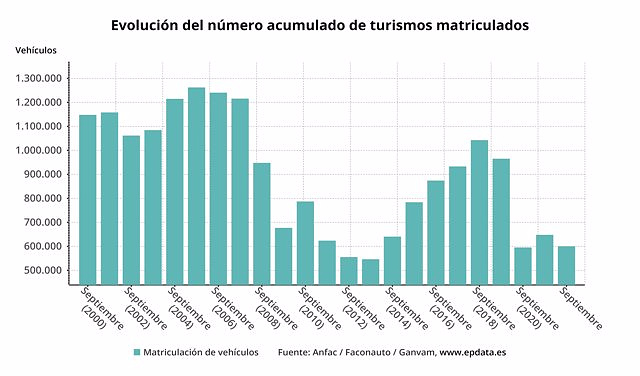 The Spanish car market registered a drop of 7.4% in the first nine months of the year, to 600,281 units, although in September registrations increased by 12.74%, to 67,240 cars and SUVs, according to data from the associations from manufacturers (Anfac), dealers (Faconauto) and sellers (Ganvam).

In renting, registrations reached a volume of 20,694 units last month, which translates into an increase of 17.9% in the year-on-year comparison, while between January and September the fall in this channel was 5.5% , up to 183,498 units.

The Director of Communication and Marketing of Anfac, Félix García, pointed out that sales have risen two months in a row in a context of a falling market, to which is added that although there is an existing demand, the shortage of components is conditioning that it can be satisfy.

"To this is added that economic uncertainty and geopolitical tensions, whether due to the war in Ukraine or the situation in Taiwan, one of the main manufacturers of these components, have not ceased and will continue to be factors that determine the evolution of the market in the coming months," he explained.

For his part, Faconauto's Director of Communication, Raúl Morales, stressed that although brands and dealers try to solve stock problems by having vehicles with immediate delivery, there is a "clear weakening" in demand due to the unfavorable economic situation.

"In this last quarter, we are concerned, in addition to the general lack of buyer confidence, that the rise in interest rates could become another extra factor that demobilizes sales. The result of all this context is that the new vehicle is is taking away from the possibilities of the average Spanish family," Morales stressed.

In addition, Tania Puche, Director of Communication at Ganvam, highlighted that production has experienced moderate growth as a result of a slight improvement in the supply of materials.

"We cannot lose sight of the fact that we are still far from the pre-pandemic figures and the supply of components is still volatile, so we are facing an uncertain autumn that does not allow us to speak of a recovery yet. In fact, the 2022 financial year will once again close well below of the 900,000 units, that is to say, it will be as if we had been three years in a row with a quarter less activity", he recalled.

The Spanish market was dominated in September by alternative energy models, which accounted for 43.9% of sales, compared to the 38% share of gasoline and 18.1% of diesel, while between January and Last month, 42.8% of penetration corresponded to gasoline models, 17.5% to diesel and 39.7% to vehicles with other technologies.

‹ ›
Keywords:
FaconautoAnfac
Your comment has been forwarded to the administrator for approval.×
Warning! Will constitute a criminal offense, illegal, threatening, offensive, insulting and swearing, derogatory, defamatory, vulgar, pornographic, indecent, personality rights, damaging or similar nature in the nature of all kinds of financial content, legal, criminal and administrative responsibility for the content of the sender member / members are belong.
Related News