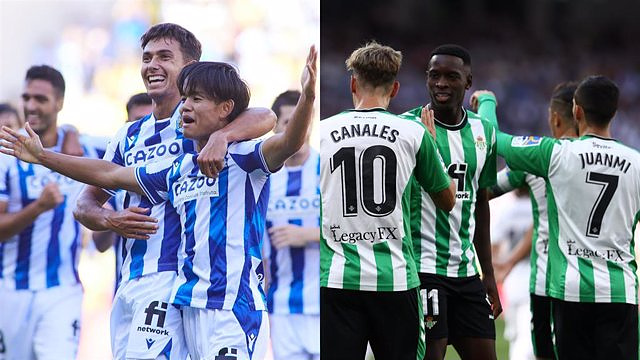 This Thursday (9:00 p.m.), Real Sociedad will experience its Europa League debut against Manchester United, the toughest rival in its group, at Old Trafford, a first high-level European test and from which it hopes to get something positive to start positive, while Betis will debut (21.00) in Helsinki against HJK, a more affordable rival, although shielded in the strength of their artificial turf fort.

The 'Teatro de los Sueños' will be the setting for Real Sociedad's debut in this edition of the Europa League, a Basque team that has never beaten the English team. Thus, overcoming the debut with a win would give wings and confidence to a squad that has only lost this season against FC Barcelona (1-4).

Thus, those led by Imanol Alguacil will look to the 'Red Devils', a very important rival -more with the reinforcements of Casemiro and Antony- to give continuity to what was offered in the draw against Atlético de Madrid. The defensive aspect seems key to get something positive out of Old Trafford, something that the realists have taken care of 'half' so far this year, with five goals against and two clean sheets in four games.

In addition, and after the departure of Alexander Isak, the goal has become an obsession for Alguacil. Newcomers Umar Sadiq and Alex Sorloth must rise to the occasion at United's fiefdom, against an English side that the Basque side have never scored against. They haven't managed to win either, with two goalless draws and two defeats (1-0 and 0-4) as an overall balance between both teams.

A difficult bone to crack for Real Sociedad, where Imanol Alguacil will have to decide if he opts for rotations or if he opts for his best pieces given the scenario and the rival, although he will not be able to have Le Normand, the main casualty, whose position Aritz opts for Elustondo or Jon Pacheco. Umar Sadiq, who already scored in his debut against Atlético, aims to start.

For its part, Manchester United will receive Real after its urgent resurgence in the last two weeks, after its initial slump. With the situation of Cristiano Ronaldo -chains four consecutive substitutions- still beating in the club, the 'Red Devils' link four wins in the Premier, after the bump against Brentford (4-0).

An improvement that Ten Hag's men needed to feel competitive again and reconcile with the good feelings and that they confirmed with the victory against the leader Arsenal (3-1). Now the English want to transfer their enthusiasm to the European competition, which could serve to see the newcomer Casemiro and the 'rebel' Cristiano Ronaldo in the eleven.

Real Betis will also experience its debut in the Europa League this Thursday (6:45 p.m.) in Helsinki, in a much more 'placid' debut against HJK, one of the 'Cinderellas' of their group, along with Bulgarian Ludogorets.

With José Mourinho's Roma as the main rival for first place in the group, the Verdiblancos should not lose any points in one of the most affordable matches of this phase and begin to generate a cushion that could be key in the future in a competition where go further than last year (round of 16).

HJK Helsinki is fully immersed in its domestic championship, which kicked off in April. They have chained nine games without losing this course and the Bolt Arena, with artificial turf, has become their main weapon, where they have only lost three of their last 18 home games. He reached the Europa League after being eliminated from the Champions League qualifying phase at the hands of Viktoria Plzen.

After their defeat (2-1) at the Bernabéu on the last day of the League, Pellegrini's men want it to be just a tiny stain on their almost impeccable start to the season -9 out of 12 possible points-. This added to his greater experience in Europe should be enough to take his first three points.

The Chilean will not be able to count on Nabil Fekir, injured at the Bernabéu and has doubts about Willian Carvalho, but he recovers Pezzella, who did not play due to suspension last Saturday, for an eleven where changes are expected, as happened last season.

‹ ›
Keywords:
FinlandiaReal SociedadBetis
Your comment has been forwarded to the administrator for approval.×
Warning! Will constitute a criminal offense, illegal, threatening, offensive, insulting and swearing, derogatory, defamatory, vulgar, pornographic, indecent, personality rights, damaging or similar nature in the nature of all kinds of financial content, legal, criminal and administrative responsibility for the content of the sender member / members are belong.
Related News