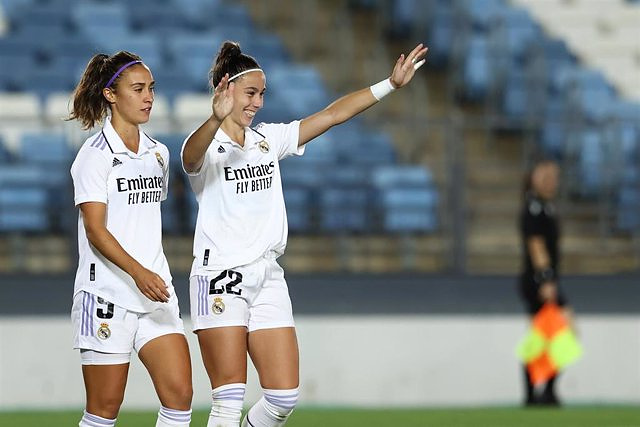 Real Madrid faces this Wednesday at the Lerkendal Stadion against the Norwegian Rosenborg (6:00 p.m.) the first leg of the second round of the qualifying phase of the Women's Champions League, in which Alberto Toril's team will seek to approach the qualifying phase continental competition groups.

After finishing third in the F League last season, the madridistas have been forced to play the previous rounds, in which they have eliminated the Austrian Sturm (6-0) at the Alfredo Di Stéfano Stadium and Manchester City (1-0 ) at home.

Now, they will travel to Norwegian lands to face their first two-leg tie, with the incentive that everything will be closed at home in a week. The award, being for the second consecutive year among the 16 teams that will play the highest European competition, in which the previous year they reached the quarterfinals and were eliminated by FC Barcelona -1-3 and 5-2-.

The victory in the first match of the F League against Valencia (2-0), with goals from Tere Abelleira and Nahikari García, fills the morale of a team that, however, will have to deal with the loss due to injury to Olga Carmona and Naomie Feller, who were no longer available against the 'che' team.

Before them, on the artificial turf of the Lerkendal Stadion in Trondheim, they will find a more rounded Rosenborg that is second in the Norwegian league, in which it is the team with the fewest goals (12), after 13 wins, two draws and three losses in the Regular Phase and a win and a tie in the Championship Group, which fights for the title.

The Scandinavians hope to recover from the bad taste in their mouths experienced in the first qualifying round of the previous edition of the European tournament, when another Spanish team, Levante, eliminated them in extra time (4-3).

‹ ›
Keywords:
Real MadridChampions LeagueMujer Y Deporte
Your comment has been forwarded to the administrator for approval.×
Warning! Will constitute a criminal offense, illegal, threatening, offensive, insulting and swearing, derogatory, defamatory, vulgar, pornographic, indecent, personality rights, damaging or similar nature in the nature of all kinds of financial content, legal, criminal and administrative responsibility for the content of the sender member / members are belong.
Related News