Real Madrid pulls out its 'stuck' at Celtic Park

Real Madrid pulls out its 'stuck' at Celtic Park. 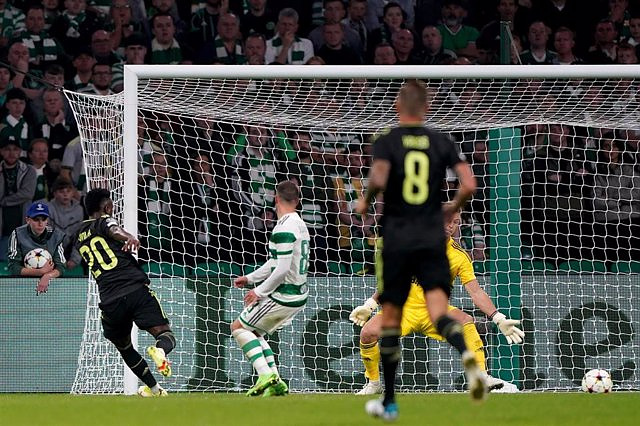 Real Madrid pulls out its 'stuck' at Celtic Park

The current champion solves thanks to two goals in four minutes an uncomfortable night against a brave Celtic, but loses Benzema

Real Madrid used its well-known 'punch' to carry out this Tuesday the premiere of the defense of its Champions League title, resolved by a clear 0-3 against Celtic, a rival that caused more complications than expected. reflects the score to a madridista team that also has bad news in the worrying injury of Karim Benzema

The Scottish team took a severe punishment, perhaps too much for what they offered their fans. He was ambitious and brave from the kick-off and had good chances to take the lead, but the defending champion held on and waited for his chance to score his first three points.

The goals from Vinicius and Luka Modric in just four minutes of the second half gave him the air he needed and Eden Hazard, chosen to relieve the captain, sentenced a game that ended up being more placid and that served to increase his confidence in this positive start seasonal.

The champion hadn't visited Celtic Park for more than four decades and from the opening whistle he saw how he drives his team, who left unapologetic and run amok. Abade gave a warning before the first minute that he did not expect a comfortable night for the madridistas, unable to take the game to their ground and unable to take advantage of the spaces left by the local momentum.

The clash began with a lot of pace, but it was Celtic that most threatened Courtois's peace of mind, with his defense, especially Militao, having to multiply to hold off the Verdiblancas onslaught. Within the siege of the Scottish team, McGregor brushed the 1-0 with a tremendous shot to the wood, and a boarding by Hatate also created concern.

Real Madrid, on the other hand, had hardly shown signs of danger except for a shot by Modric that tripped over a defender when he was going towards Joe Hart's goal, but he appealed to his experience to calm things down little by little, supported by Kroos and his mettle. The match calmed down and within that longer pause came bad news for Carlo Ancelotti, who saw Karim Benzema leave after half an hour injured.

The Italian chose to give Eden Hazard a chance, surely in search of a greater ability to have the ball ahead of a final stretch where his team enjoyed two good chances to have gone ahead at half-time. The first was from the Belgian, who failed to connect a pass from Carvajal a few meters from the goal, and the second from Vinicius, who received a pass from Hazard himself to be left alone, but was not able to define well due to the good start of Hart.

The passage through changing rooms left another loss in the visiting ranks, with Militao, due to discomfort, being relieved by Rüdiger for a second 45 minutes that started more balanced, although Celtic had a great opportunity again. The recently entered Maeda emulated Hazard and did not know how to finish off Juranovic's powerful center in the best way.

The current champion still did not get the pulse of the clash, with Modric well controlled, little impact from Vinicius and the clear lack of one more player from the area, while his rival still did not take a step back, when everything changed in a few minutes.

The ambition of the Scottish champion ended up being punished by Real Madrid, who managed to get a ball out under local pressure and find the possibility for Valverde to run with space. The Uruguayan, who participated at the start with a great spur blow to Hazard, raised his head and, as in Paris, found Vinicius free so that he could calmly define the 0-1. Before Celtic digested the blow, another attack, well led by Hazard, was closed by Modric with the outside to bring the victory closer.

The game turned uphill for the locals, who kept trying, but, with the expected loss of steam, they did not squeeze the visitors so much, already more comfortable and appealing to their technical quality. Ange Postecoglou sought to regain intensity with a triple substitution, but Real Madrid showed that they also know how to generate with the ball and Hazard boosted their morale by pushing a pass from Carvajal into the net this time to close out a great team move. Celtic, true to his style, did not lower their arms, but only found consolation in the affection of the stands.