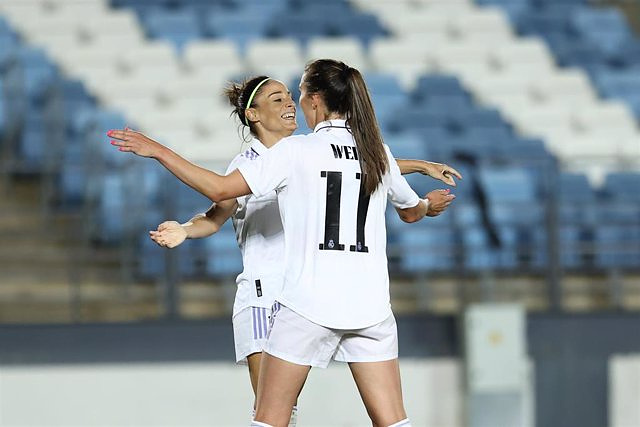 Real Madrid got a foot and a half into the group stage of the 2022-2023 Women's Champions League after beating the Norwegian Rosenborg away with great authority this Wednesday, whom they defeated 0-3 with prominence for Caroline Weir and Athenea del Castle.

The Madrid team passed the visit to the Lerkendal Stadium, where the men's team suffered on some of their European nights, and they did so with more comfort than expected, but confirming their current form and the difference between the two teams.

Alberto Toril's team has started the season very strongly and did not relax one iota or save anything for the second leg at the Estadio Alfredo Di Stéfano. The quality of Weir and Del Castillo were unstoppable for the locals, who didn't bother Misa Rodríguez too much either.

Real Madrid was in control from the start of a match that was able to decide very quickly with two very clear chances in the opening minutes, but Athenea del Castillo, after a good maneuver inside the area, ran into the quick intervention of Christensen, and Esther González, in a very frank position, finished off too high.

Warnings that did not take long to become 0-1 before the first quarter, the work of Caroline Weir, who continues to demonstrate her quality and the success of her signing. The Scot grabbed a good shot from outside the box against which the Norwegian team's goalkeeper could do nothing.

The advantage on the scoreboard further settled the visitors, whose pressure did not allow Rosenborg to maneuver too much as they tried to surprise with long balls and in some transitions, although without much success. Her best chance was a long shot from Magnusdottir, which Misa Rodríguez sent to a corner and that was the prelude to the 0-2 in the 34th minute. Athenea del Castillo showed her quality in the overflow and her shot, somewhat cornered, surprised in the first stick to Christensen.

With 0-2, the break was reached and after this the script did not change too much. The Madrid team did not let up and went out in search of the final sentence, which was not long in coming. Del Castillo read the clearance behind Weir's defense and sent the Scot a perfect shipment that his teammate did not waste to sentence the duel and practically the tie.

From then on, Alberto Toril's team began to slow down little by little, although that did not help Rosenborg too much, who, despite stepping a little more in the area, was not able to instill too much fear into a Misa Rodríguez who once again he left his goal to zero.

‹ ›
Keywords:
Real MadridChampions LeagueMujer Y Deporte
Your comment has been forwarded to the administrator for approval.×
Warning! Will constitute a criminal offense, illegal, threatening, offensive, insulting and swearing, derogatory, defamatory, vulgar, pornographic, indecent, personality rights, damaging or similar nature in the nature of all kinds of financial content, legal, criminal and administrative responsibility for the content of the sender member / members are belong.
Related News