The whites, who are looking for their first victory in preseason, will face Juve in the early hours of Sunday in the last preparation match. 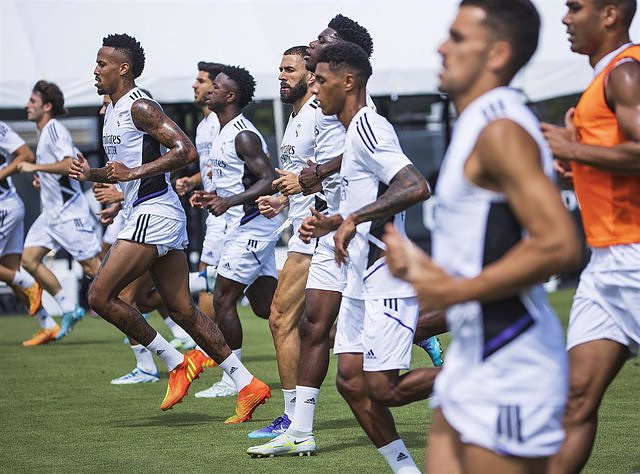 The whites, who are looking for their first victory in preseason, will face Juve in the early hours of Sunday in the last preparation match

Real Madrid will culminate its set-up for the start of the season with its last preparation match of the tour in the United States against Juventus, at dawn from Saturday to Sunday (4:00 a.m.), a match that will serve the Whites as a definitive rehearsal before the European Super Cup, the first title of the course.

The Rose Bowl Stadium, in Pasadena, will be the scene of the third and final summer test for the Merengue team, who will seek their first victory of the preseason against the Italians, after falling in the Las Vegas Classic (0-1) and only drawing (2-2) against Club América, in a duel in which Karim Benzema reappeared with a goal, who seems to start the new season as well as he finished it a few months ago.

Carlo Ancelotti will have his last opportunity to test in search of the starting 'eleven' who will try to lift the European Super Cup against Eintrancht on August 10 in Helsinki. Thus, this level duel against the 'Vecchia Signora' will allow the mechanisms of the white gear to be adjusted, which the Italian has been molding and fitting during the North American tour.

Real Madrid, from less to more in this preseason, will have as its most important missions to improve their fluidity with the ball and find a greater rhythm of play, similar to that of the first official match of the season. This foreshadows that Ancelotti will start the team that will presumably start in Helsinki, and in which he will reward the champions in the final of the fourteenth European Cup, to maintain the improvement against the Mexican team in the second match of the 'Soccer Champions Tour'.

The Italian is not a big fan of tests or unnecessary risks. Thus, Courtois, the best of the whites in the summer Classic, has secured his position. In defense, the biggest doubt is that of Carvajal, touched on the ankle and between cottons. It remains to be seen if the enthusiasm and grit of newcomer Rüdiger can convince the coach, who seems to be faithful to his central pairing formed by Militao and Alaba. Mendy would be the duel in the left lane at the back.

In their second test of the tour against América, with a lesser rival and much more grounded and with more work on their legs, the Madrid team improved their version of the match against FC Barcelona and opened the scoring locker for the first time thanks to a plugged-in Benzema who has not broken his idyll with the goal. The Frenchman, flagship and beacon of the team, has his fixed spot, as well as Vinicius, who continues with freshness and overflow. Thus, the unknown surrounds the companion of both, with Valverde, Asensio, Rodrygo and Hazard as applicants.

The Uruguayan seems to be the one who enjoys an advantageous position, reinforcing the scheme with Casemiro, Kross and Modric -the Croatian has already returned to training after suffering from a fever-, so it seems that the other three will have to wait their turn in the bench to show against Juventus that they want to start in Helsinki. However, the game will also serve to distribute minutes and load, with opportunities for the Camavinga, Ceballos, Tchouameni and company, who have burst into force and prominence at the start of the course.

Opposite will be a Juventus that has been reinforced with important pieces this summer. In his last preparation game, he could not get past the draw (2-2) against Barça, in a duel in which the Argentine Di María played again and in which Allegri changed the system, now without Pogba due to an injury to knee.

The Italians will seek to spoil Real Madrid's last summer party, with a very renewed team in which the mixture of youth and veteran will pretend to be the ingredients of the recipe for success in Los Angeles. This will also be the third preparation match for Juventus on their tour of the United States, after beating Mexican Guadalajara (2-0) last Friday and the aforementioned duel against the Catalan team.