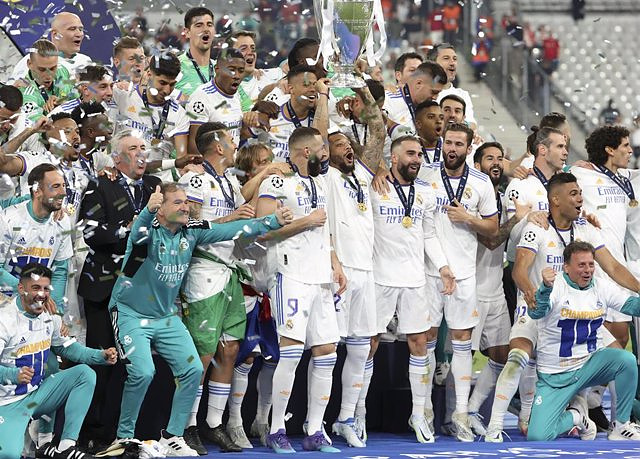 The 2022-2023 season of the Champions League will start this Tuesday with Real Madrid defending the throne that it achieved on an epic basis last season and against a well-known list of highly reinforced rivals, including FC Barcelona that aspires to be the protagonist from a group stage without respite and with Atlético de Madrid and Sevilla completing the representation of Spanish football.

32 teams from 15 countries, without the sanctioned Russian clubs, will begin this Tuesday to fight to reach the final of the maximum continental competition that will finally host Istanbul at a later date than usual, on June 10. The reason, the World Cup in Qatar that begins at the end of November and that will also cause the group stage to have to be compressed a lot, with consecutive weeks with matches, and ending on November 2, a month earlier than normal.

Real Madrid will be in charge of defending the title. The Madrid team lifted their fourteenth European Cup on May 28 after beating English Liverpool at the Stade de France in Paris with a goal from Vinicius. Few had those of Carlo Ancelotti to win the title at the beginning of the season, but, despite being on the brink of the abyss on many occasions, he was the best after leaving candidates like the French PSG and Chelsea and Manchester City on the way english

Now, due to their status as current champions, the Madrid team is the rival to beat and surely no one doubts that they will want to take their defense as far as possible to try to repeat the milestone of having won three in a row between 2016 and 2018.

For this, the Madrid team, which has an accessible first group with the German RB Leipzig, the Ukrainian Shakhtar and the Scottish Celtic, will have practically the same block as last year, led by Karim Benzema and Vinicius, and only reinforced by Aurelien Tchouameni , who will take the role left by Carlos Casemiro, the main casualty, and Antonio Rüdiger.

FC Barcelona has strengthened much more in order to once again be the protagonist of a top continental competition that has given it few joys since it was crowned champion for the last time in 2015. Since then, it has only been able to reach the semifinals, in 2018-2019, being the victim of a 'black night' at Anfield.

The 8-2 against Bayern in the Lisbon 'Final 8' of the year of the pandemic and the elimination in the round of 16 against PSG 20-21 were a prelude to a bad last European campaign, where they passed the group stage and then fell in the quarterfinals of the Europa League against Eintracht, losing at the Camp Nou.

The signings of Robert Lewandowski, Raphinha or Jules Koundé lead Xavi Hernández's ambitious project to try to be among the best in Europe again, although his first part of the journey is very hard with Bayern, executioner in recent years, Inter Milan and the Viktoria Plzen.

For its part, Atlético de Madrid will try to return to being the traditional headache for its rivals, supported by its competitive nature and in search of some final rounds that have also resisted it since 2017, when it reached the semifinals for the last time .

Quarterfinalist last year fighting to the end with his weapons against Manchester City, Diego Pablo Simeone does not have too many touches in his squad for the continental assault, which will start in a friendlier group than last year with Porto, Bayer Leverkusen and witches

The short list of representatives of LaLiga Santander is completed by the other regular of these years, a Sevilla to which the Champions League comes at a time of sporting anxiety after its bad start in the league and after losing key pieces such as Diego Carlos, Koundé or Lucas Ocampos. Last year he stumbled and did not go through to the crossings in a group without great difficulties, quite the opposite this year with City and Borussia Dortmund, in addition to Copenhagen.

Spanish football was the protagonist last year with the title of Real Madrid and the unexpected semifinals of Villarreal, absent this season where it will be the Bundesliga that will have five teams for the first time (Bayern, Leipzig, Dortmund, Leverkusen and Eintracht). The other two semi-finalists were from the powerful English Premier League (City and Liverpool), which will try to demonstrate their current strength again.

Pep Guardiola's Manchester City will start again among the main contenders to finally win the long-awaited Champions League and for this they will have a weapon that they have not possessed until now. And it is that the signing of the Norwegian Erling Haaland gives the English champion a 'predator' of the area to significantly increase his chances of reaching the end.

Liverpool, current runner-up and not yet fully fueled, has also been reinforced at the front with another scorer who gave a great level last year, the Uruguayan Darwin Núñez, who will form a new trident with Mohamed Salah and Luis Díaz, already that Sadio Mané headed for Munich. Chelsea, champion in 2021, and Harry Kane's Tottenham complete the Premier poker game.

The shortlist of applicants is completed by two other 'old acquaintances' such as Bayern, who after their conquest in 2020 have not even tasted the semifinals again and who have been reinforced with Mané to replace Lewandowski, and PSG, who managed to His great star, Kylian Mbappé, did not go to Real Madrid to look for a very elusive Champions despite having a squad with a lot of potential where Leo Messi and Neymar remain, and to which the Spaniards Carlos Soler and Fabián Ruiz have arrived.

Finally, although from what has been seen in recent years it seems to be one step below, Italian football will oppose Inter, the resurgent Milan, which remains the second most successful in the competition, and Juventus as candidates to try a reign that has resisted him since 2010 (Inter).

‹ ›
Keywords:
Real MadridChampions LeagueFútbol Club BarcelonaAtlético De Madrid
Your comment has been forwarded to the administrator for approval.×
Warning! Will constitute a criminal offense, illegal, threatening, offensive, insulting and swearing, derogatory, defamatory, vulgar, pornographic, indecent, personality rights, damaging or similar nature in the nature of all kinds of financial content, legal, criminal and administrative responsibility for the content of the sender member / members are belong.
Related News